SEAHAWKS ASSISTANT COACH: ‘JESUS IS BETTER THAN THE SUPER BOWL’ by David Daniels 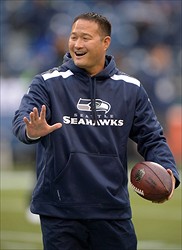 In his interview with The Gospel Coalition about his faith, his football career, and Super Bowl XLIX, Seattle Seahawks assistant coach Rocky Seto asked for one editorial favor.

Seto made the same comment— that Jesus is better than the Super Bowl—in a interview in December 2013. Less than two months later, the Seahawks won the Super Bowl.

On February 1, Seto will win it again if the Seahawks beat the New England Patriots. Even if they lose, though, Seto will continue to preach the same sermon, says Mike Sylvester, director of Athletes in Action at the University of Southern California (USC).

"Don't get me wrong," Sylvester said. "Rocky is a competitive man. I've only seen a handful of other people who've worked as hard as Rocky has . . . but if the Seahawks don't win, Rock would say, 'To God be the glory. He's still on the throne, and he's still the only one who matters,'" because Seto knows his back-to-back Super Bowls berths would never have happened without his Christian faith.

Raised a short drive from the Los Angeles Memorial Coliseum, Seto dreamed as a teenager of playing football at USC.

But he wasn't talented enough to make the transition directly from Arcadia High School. His parents, Japanese immigrants, preferred for him to attend a four-year college. Instead Seto enrolled at Mt. San Antonio Community College with the intention of transferring to USC after two more years of hard work.

"My whole identity was tied into playing football at USC," Seto says. "If I took care of football, everything would be okay. I thought that, even as a boy, meaning I would feel important, have purpose, and have a mission in my life."

Seto soon heard the gospel from Sylvester and several other Christian teammates, and he realized football wasn't better than everything.

"The Lord broke me," Seto explains. "He allowed me to achieve my idol, and he showed me the idol was hollow. . . . From that moment on, I was never the same. Football was really important, but Christ showed me that he's way more important."

"[Seto] just had an insatiable hunger," Sylvester says. "I would just feed him Scripture, and he would eat it up. . . . When Rocky would come up against the hard truth of Scripture where his life was not congruent with it, then Rock didn't flinch. He's not a perfect man, but Rock really took and takes Jesus seriously."

Seto played football during his junior and senior years at USC. After he graduated in 1999, USC accepted him into its graduate school for physical therapy. But to the dismay of his parents and head coach Paul Hackett, Seto felt a calling to be a coach.

Hackett reluctantly offered him a job as an administrative assistant, which required Seto to bring the coaching staff lunch, among other humble office duties. USC fired Hackett two years later, though, so Seto braced himself to be dismissed as a new staff entered.

However, his career was extended by a relationship that began at a USC women's volleyball game. Seto had only attended the game to impress his girlfriend. But while sitting in the stands, Seto recognized and introduced himself to Pete Carroll, who was there to watch his daughter play. After USC hired Carroll as head coach, he gave Seto a shot as a graduate assistant.

Two national championships, four major bowl victories, and three job promotions later, Seto had worked his way up to defensive coordinator and achieved more at USC by 2009 than he'd ever imagined.

"That [success] was good," Seto says. "However, I think it was building idolatry in my heart. My identity was in Christ, but it was mixed in with my identity as a USC football coach."

From USC to the NFL

Carroll left USC to coach the Seahawks in 2010 and didn't initially hire Seto. After USC let Seto go during offseason, Carroll offered him an entry-level position as quality control coach.

"That really bothered me," Seto says. "I was thinking to myself, How come I wasn't brought up originally? And in my mind, I went from my dream job to what I used to do 10 years ago."

He wanted to decline the offer, but hours of prayer helped humble him. He accepted. A week later, his father-in-law, who lived in Seattle, suffered kidney failure.

If Seto had declined, he and his wife would not have been by his father-in-law's side during the next several years of dialysis treatment. Seto would also not have helped introduce a tackling technique to football last year that he and Carroll believe will significantly decrease concussions—an innovation they believe will be their greatest contribution to the sport. And this Sunday, Seto would not have a chance to win his fourth championship.

Seto himself takes little credit. "If it was up to me," he said, "I wouldn't have chosen to leave SC and come up here, but God knows better."

"This Super Bowl thing, it's such a big deal to the people of the Northwest," he adds. "You can see how the Seahawks provide identity for so many people. What's cool is that God has opened up a platform through winning to talk about Jesus Christ, the greatest treasure of all. Why do we want to win? I know the brothers on the team, they want to win to glorify God and tell more people about Jesus Christ."