First Buds of the Church by Timothy George 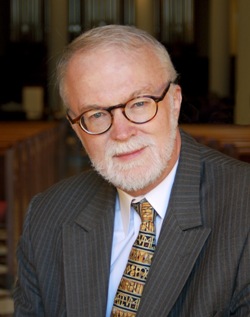 Christmas Eve and Christmas Day are over now, but the melodies linger on—not only for those who observe the full twelve days of Christmastide, but also for others for whom the season has been mostly about lots of good food, good cheer, and the feel-good sentimentality of "God's in his heaven, all's right with the world."

Timothy GeorgeBut then the calendar of the Christian church does something downright rude. It reminds us of something we thought we had tinseled out of our consciousness at least until 2014, namely the violence, mayhem, and chaos that are part of what it means to be a human being in this kind of world. It does this by placing the feast day of St. Stephen, the first Christian martyr, on December 26, the day just after Christmas, and the feast day of the Holy Innocents, just two days later, on December 28.

Gail Grimshaw captures the jarring juxtaposition of these liturgical events with the season's typical merriment when she observes that, for many of our contemporaries, Christmas has become a kind of winter solstice jamboree, a neo-pagan exultation of the rhythms of the earth.

An anthropologist would see our Christmas—a blow-out, over-the-top, month-long party marked by festive meals and lavish gift giving—as the way that an affluent society keeps a time of year at which in ancient societies the people in the Northern Hemisphere welcomed with gratitude the lengthening of daylight that arrives around December 21. It is not surprising that humans will delight in the return of warmth and light to their world. Of course they will light candles and give presents; of course they will laugh in the face of the barren fields by piling up food and drink on their tables. Perhaps some ancient peoples even imagined that their partying was the impetus for the sun to shine a little longer each day, that it was thanks to their ritual that the world turned in the other direction.

All of this is cuddly, and bubbly, and far from evil in itself. But it also misses the point—the big point about the Incarnation. In Jesus Christ the Word became flesh, not flesh that always appears bronzed and buffed, but quivering, withering, vulnerable flesh. In Jesus Christ the Light shines in the darkness. It shone precisely in the darkness of two Bethlehem nights: one in which the angelic heralds broke through with their "Gloria in excelsis!" and that other night of wailing and lamentation, of Rachel weeping for her children.

Herod's murderous assault on the baby boys of Bethlehem and the "outlying districts" (he was thorough) has gripped the imagination of the Christian church since it was first included in the Leonine Sacramentary in 485. For Matthew's Jewish readers it would have recalled another massacre of innocents, Pharaoh's sinister plot to kill the male offspring of his Hebrew slaves, a gender-based eliminationist scheme that has often been practiced in reverse from ancient Rome to modern China: "If it is a boy, kill him; but if it is a girl, she shall live" (Ex. 1:15-22). But the victims of Herod's rage in Bethlehem have also come to represent a host of others who have experienced massive suffering "through no fault of their own." Thus the massacre of the innocents is vividly portrayed in the apse of the medieval cathedral in Siena, a city that lost more than one-third of its human population during the Black Death. Then, during the sixteenth century's wars of religion, Peter Bruegel's artistic rendering of the theme depicts Herod's soldiers carrying out their gruesome work under the banner of the Hapsburg double-headed eagle.

But why were the Bethlehem victims remembered as martyrs? What made their innocence holy? And who were they? Their very anonymity, of course, is a part of the story. They could have been any little boy, two years old or younger, who just happened to have been born in the wrong place at the wrong time. Perhaps one of them was an infant son of one of the shepherds who were terrified by a strange light in the sky one night, or the grandson of the local keeper of the inn who found a place for a Palestinian peasant girl to give birth in the animal shelter out back. Raymond Brown in The Birth of the Messiah estimates that their number might have been as many as ten or twenty out of a village of one thousand or so. Later traditions exaggerated their number into multiple thousands and identified them with the 144,000 who are among the multitude of martyrs who stand before the throne of God and the Lamb, robed in white with palm branches in their hands, crying, "Salvation belongs to our God!" (Rev. 7:4-10).

The martyr status of the murdered boys of Bethlehem has been much debated. How can they be reckoned martyrs when they did not live long enough to consciously confess Christ or choose the way of the cross? And what of the fact that they died without the benefit of baptism? There are extensive and complicated answers to such questions. But perhaps these queries are, as the French say, mal posé. The Church is right to remember December 28 as the "heavenly birthday" of these children who were put to death for only one reason: They looked like Jesus. As St. Augustine said, "These then, whom Herod's cruelty tore as sucklings from their mothers' bosom are justly hailed as the infant martyr flowers, the first buds of the church killed by the frost of persecution. They died not only for Christ but in his stead."

Herod, the royal monster, will do anything to get rid of Jesus. Like all tyrants, he is afraid. He walks on stilts, puffed up by the pretense of power, brazen but brittle. But he is on his last legs, and he knows it. A baby sneezes in Bethlehem and, nine miles up the road, old Herod catches pneumonia. No wonder the tyrant is troubled and all of his cronies with him. All he has left is bullying, murder, realpolitik.

At its most basic level, this is what Christmas is all about: a rivalry of reigns. This is why the Christ of the crèche is often portrayed in Christian art as a small king sitting on Mary's lap, already wearing a crown and wielding a scepter. His manger is a throne, as his cross will also be when, having escaped one King Herod, he will stand before another on behalf of all of the innocents, and all of the guilty ones too. It was for this that he was born, and for this that he came into the world.

Knowing this, we dare not reduce this holy season to a private domestic affair. With Charles Wesley, we sing and pray:

Come, Desire of nations, come,
Fix in us Thy humble home;
Rise, the woman's conqu'ring Seed,
Bruise in us the serpent's head.

Now display Thy saving pow'r,
Ruined nature now restore;
Now in mystic union join
Thine to ours, and ours to Thine.

Timothy George is dean of Beeson Divinity School of Samford University and chair of the Doctrine and Christian Unity Commission of the Baptist World Alliance. He can be reached at This email address is being protected from spambots. You need JavaScript enabled to view it..