Christ is a Great Savior: a review of the movie Amazing Grace 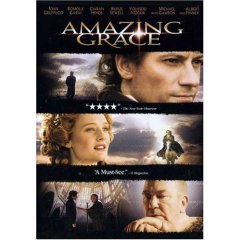 Amazing Grace is a historical drama about William Wilberforce who was elected to British Parliament at the age of 21 in 1780. Because of his deep religious beliefs he became one of the leading English abolitionists against the British slave trade.

The movie follows his religious conversion in 1785 when he prepared to leave politics to enter the clergy but was convinced by his friend William Pitt, the future Prime Minister, to stay in Parliament because he could use his oratory “to praise the Lord or change the world”. Wilberforce was opposed to Britain's thriving slave trade, and with the help of prominent abolitionists of the era (Thomas Clarkson, Olaudah Equiano and John Newton) fought an uphill 20 year battle to eventually abolish the English slave trade in 1807. In this film, it is John Newton—a former slave ship captain and the author of the hymn "Amazing Grace"—who convinces his friend Wilberforce to take up the cause and encourages him along the way. Amazing Grace is an inspiring movie about one man's response to injustice. This movie is an example for us to leave our comfort zone and by faith use our God-given opportunities to change the world for good.