Tim Keller Wants You to Suffer Well by Matt Smethurst 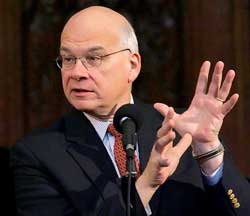 Suffering. Is there a more perennially and painfully relevant topic? Countless books address the subject—and countless sufferers read them. Beneath the sometimes shiny veneer, after all, this world is a profoundly tragic place.

Christian books on suffering tend to fall into one of three camps. Some are philosophical, written to address the "problem of evil" and other complex questions from a typically scholarly perspective. Others are theological, intended to survey the breadth of God's Word to see what it has to say about affliction and evil. Still others are pastoral, designed to give down-to-earth devotional help to those locked in the grip of pain.

Of course, these categories often overlap, and some books may capably address two. I don't know of any, however, that thoroughly tackles all three like Tim Keller's new Walking with God through Pain and Suffering. (Read Joni Eareckson Tada's review.) With an academic mind and a pastor's heart, the senior minister of Redeemer Presbyterian Church in New York engages our minds and our hearts with the truth-anchored hope of the gospel.

I corresponded with Keller about the wimpishness of Westerners, the bankruptcy of secularism, the usefulness of Judgment Day, the gymnasium of God, and more. And come back tonight to watch the livestream from New York as Keller discusses his newest work.

We are "more shocked and undone by suffering than were our ancestors," you observe. Why is suffering peculiarly traumatic for modern Westerners?

Most cultures—unlike our own—expect suffering as inevitable and see it as a means of strengthening and enriching us. Our secular culture, on the other hand, is perhaps the worst in history at helping its members face suffering. Every other culture says the meaning of life is something beyond this world and life. It may be (a) going to heaven to live with God and your loved ones forever; (b) escaping the cycle of reincarnation in order to enter eternal bliss; (c) escaping the illusion of the world to go into the all-Soul of the universe; (d) living a moral, virtuous, honorable life even in the face of defeat and doom; or (e) living on in your family and descendants. In each case suffering, though painful, can actually help you reach your life goal and complete your life story.

But in secular culture the meaning of life is to be free to choose what makes you happy in this life. Suffering destroys that meaning. And so, in the secular view, suffering can have no meaning at all. It can't be a chapter in your life story—it is just the interruption or even the end of your life story.

In what sense is the secular view of suffering, as French philosopher Luc Ferry put it, "too brutal to be honest"? Conversely, how does the Christian view offer both "greater room for sorrow and greater basis for hope"?

Ferry is referring to the remark, "If when we die we simply cease to exist, there is no reason to dread death at all." After all, the reasoning goes, when I'm dead I won't know anything. But Ferry says anyone who loves other people has to dread losing the relationship. It's impossible not to want love relationships to endure, and death means (in the secular view) the end of all love relationships. So for a secular person to say there's no reason to dread death seems dishonest.

Because Christianity gives us an assured hope that we will have infinitely greater and unending love relationships (with God first and foremost but with others too), this gives us not only a greater basis for hope, but it also gives greater room to express our sorrow. We don't have to detach our hearts from loved ones the way the ancient and modern stoics have done in order to protect themselves emotionally from the hopelessness of death.

How does Christian belief in Judgment Day keep us from being too passive or too violently aggressive in our pursuit of truth and justice?

On the one hand, Judgment Day shows us that God hates sin, evil, and injustice and therefore we should hate it too. That prevents mere acquiescence in the status quo. But Judgment Day also assures us God and truth will eventually triumph, and that means it's not all up to us. We can't bring about complete justice by any human initiative. This discourages utopianism and the cruelty that so often accompanies such a false hope.

In contrast to karma and even common sense, how is the Bible's perspective "less flattering to non-sufferers" and "kinder to those who are hurting"?

Karma says that if you're suffering you always personally deserve it—it's because of something you did in another life. And so if you aren't suffering, it must be because you lived well in the past and earned your current pleasant life. Readers of the Bible will recognize this as the view of Job's friends, a view that God condemns. The Bible's perspective is that suffering is not distributed according to the relative moral deserts of people. Good people don't all have more pleasant lives while bad people all have more difficult lives. That's not the way of things. "A poor man's field may produce abundant food, but injustice sweeps it away" (Prov. 13:23). And so because Scripture makes this claim, it is less flattering to non-sufferers. Biblically, you cannot assume your good circumstances mean God is pleased with you. It may be his way of judging you, allowing you to perish in your complacency. And biblically, you cannot assume that if you're suffering it's a direct chastisement for some wrongdoing. See John 9 and the whole book of Job.

How is the Bible's teaching on suffering "profoundly realistic and yet astonishingly hopeful"?

It's profoundly realistic because it tells us suffering is inevitable. No one escapes it. We shouldn't be surprised and shocked by it. The Bible is terribly matter-of-fact about the reality that the world is filled with misery. Yet it offers not merely a spiritual afterlife but the hope of a renewed creation, the resurrection, and a material world wiped clean of decay and suffering and death. No other religion promises such a thing.

The Bible presents God's relationship to suffering as both "stronger" and "weaker," as it were, than does any other religion. On the one hand, God is absolutely sovereign over suffering. It's never out of his control. It's always part of his plan. On the other hand, God has come into the world himself and actually suffered with us. No other religion says that God is both a sovereign and a suffering God. This is the theological foundation for why Christians can be so realistic and yet so hopeful about suffering at the same time.

One of the themes pervading the book is the idea that suffering ought not be avoided or denied. Why should we embrace the experiences in "God's gymnasium" that he sends our way?

Secularism sees suffering as completely useless, while many ancient religions see suffering as useful to your character growth and spiritual attainments. While Christianity certainly acknowledges the outrageous, mysterious injustice of much suffering (as does the West)—and while it also points to the ways it serves as a "gymnasium" to help us grow stronger spiritually (as does the East)—I don't think the Bible sees the main use of suffering to be our benefit. I think the main reason we should be patient under suffering is that it glorifies God and that, for Christians, doing so is our greatest pleasure and duty. When we endure suffering with all the patience we can muster, we treat God as God, and that glorifies him, regardless of any other results we can discern.

Why were early Christian churches "famously good places to be a person in suffering"? What can we learn from our spiritual forebears in this regard?

Society was more stratified, and the poor and marginalized classes were despised in the early days of Christianity. The church was far more open to the poor, women and children, slaves and the sick. In some ways it's harder for churches today to look as compassionate to the world because secular Western society has co-opted the humanitarianism Christianity originally introduced. Christians displayed a previously unheard-of concern for all suffering people for many theological reasons, but especially because of their belief in the imago Dei in every individual. It remains to be seen whether our society—which is abandoning the idea of God and the imago Dei—can maintain its record of humanitarianism without it. Meanwhile the Christian church must certainly, then, be at least as well known for its care for sufferers as our spiritual forbears were.

You reflect how, before your cancer surgery a few years ago, you were granted a "sudden, clear new perspective on everything. It seemed to me the universe was an enormous realm of joy, mirth, and high beauty. . . . I went to sleep with a bright peace on my heart." How can a sufferer get that kind of peace?

You can't. I mean there's nothing you can do that necessarily brings it about. It's a gift. You should trust and pray and pour out your heart honestly to God and look to him. He promises in texts like 1 Corinthians 10:13 that you will have enough strength to get through it—but he doesn't promise to give us experiences of super-abounding joy and serenity such that for a moment the stress and sadness seem to melt away. That can happen, and we should be endlessly grateful for such "touches" of God's love. But he doesn't promise them, and only he knows what we need and when. Remember John Newton's maxim: "Everything is needful that he sends; nothing can be needful that he withholds."