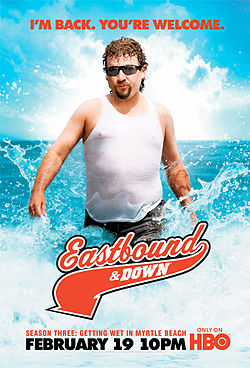 Now that we're back from Williamsburg (or as I sometimes call it in my mind, "Billsburg,") we're catching up on the shows we Tivo'd... like Mad Men, the Soup, Saturday Night Live and... okay, I'll admit it - Eastbound and Down.

Now, if you aren't familiar with this lump of coal/gem of a show, it follows the zany exploits of Kenny Powers, aging minor league baseball player from Shelby, North Carolina. Currently playing with the fictional Myrtle Beach Mermen, Kenny is struggling to deal with new fatherhood and to reclaim his status as "team leader," despite the rise of a despicable nemesis named Ivan - who has a haircut that is even WORSE than Kenny's own curly mullet.
Now I'm not going to lie to you, this show is offensive. The language, the scatological and sexual references, the despicability of just about every character... I have a high tolerance, but I have to say, I am often offended while watching. Not shocked, exactly, although I suspect that's what the writers intend. No, I'm more... grossed out. But Tom laughs and snorts through the whole thing. I'm assuming it's what they call "a guy thing."


I'm not saying I don't find it funny... I do laugh a lot. The writing manages to be at the disgusting end of puerile and clever at the same time. Creator/star Danny McBride, who is, by the way, a native of NC, is a twisted sort of genius. He has stolen many a scene from more prominent actors.

Yes, there are plenty of belly laughs to be had - I always laugh at the baby. Although Kenny is quite possibly the most ill-equipped father figure in the history of mankind, he ends up hauling around his son, Toby, for a couple of episodes. He decorates Toby's room with black light posters (one with a marijuana leaf) and weird statuary, mixes Quik into his milk and carries him in a zipped backpack... It's appalling, but it's reeeeally funny too.

Kenny's behaviour is similarly appalling in every situation. He is arrogant, belligerent, offensive, supremely selfish, oblivious and, honestly, not very smart. And in between the laughing, I am also shaking my head and... judging him. I mean, I can't even reprint any dialogue because it's just tooooooooo nasty... But last night, I realised a hard thing.

You see, Kenny and me... we're the same. I'm not saying I would stuff my child into a backpack, speak in a constant stream of intensely offensive and insulting profanity, and assert with utter confidence that I am the greatest baseball player (or any other thing) that ever lived. No... but if I spoke my honest mind all the time - let loose every crummy thought I have... then you'd know that I, too, am arrogant, belligerent, offensive, supremely selfish, oblivious and not very smart. Well, actually, I'm sort of part Kenny and part Steve, his sniveling, insecure doofus of a friend... These characters are nothing but ID, my friend.

You've probably heard that expression, "There but for the grace of God go I." Well, in this case, it's not just an expression... because it's truly by the sheer grace of God that I have any other kind of way of being... and I am so very grateful for the grace He gives to us while we are still Kennys... I mean sinners... (But God demonstrates his own love for us in this: While we were still sinners, Christ died for us. Romans 5) If I read that chapter correctly, the gist of the lines following this verse is that if He died for us while we were sinners, how much more is He going to help us now that we belong to Him? Which is nice... because if I'm going to quench my inner Kenny, I need all the help I can get.