Finding God at the UN by Charles Malik 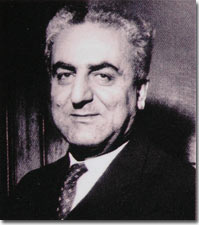 Dr. Charles Malik served as Lebanese ambassador to the United States, President of the General Assembly of the United Nations, and co-author of the original declaration of human rights (with Eleanor Roosevelt). After earning his Ph.D. in philosophy from Harvard, he was awarded more than fifty honorary doctorates.

He taught at the American University in Beirut and in Washington, at Dartmouth College, Harvard University, and the Catholic University of America. His many books include A Christian Critique of the University and The Wonder of Being, from which this essay is adapted.

Note: Describing his conversion, Dr. Malik said, "I came to know Christ directly in my life, forgiving my sins, strengthening me in trials when everything was dark and repulsive and when terrible loneliness and deep darkness were all around."

Trained in an Orthodox-Byzantine tradition, Dr. Malik said, not long before his death, "I really do not know what will remain of civilization and history if the accumulated influence of Christ is eradicated from literature, art, practical dealings, moral standards, and creativeness in the different activities of mind and spirit."

Published with permission from Finding God at Harvard (IVP), (longer text) The Wonder of Being (C. Malik, pub. Word), and (this excerpt) A Faith and Culture Devotional, (Kullberg & Arrington, pub. Zondervan).

The Future & the Wonder of Being

There goes on in the soul of each of us a most fateful struggle between two persons—the person of being and the person of not being. Which has the upper hand is the deepest question that can be asked about us at any given moment.

The person of being stands in awe before the wonderful plenitude of being, with its variety and wealth and content, its diversity of levels and orders. The person of not being dissolves this plenitude into smaller and smaller parts until they finally merge indistinguishably into one another and vanish in not being.

The person of being sometimes stops talking altogether, because he is lost in contemplation and wonder. The person of not being never stops talking, because that is his way of destroying or suspending or covering up or drowning his sense of amazement at being.

The person of being rejects magic and chance and random happenings and sees everything ultimately grounded in some meaning, some essence, some agency, some objectively existing independent being. The person of not being is easily discomfited—if he ever gets discomfited—when shown that at every turn he is espousing magic and chance as his ultimate principle of explanation, and that this is simply a device, perhaps even a disease, by which his fundamental sense of wonder is set aside or even abrogated.

The person of being is always taken by the norm, the rule, that which for the most part is the case; he never averts his gaze from it to the abnormal and exceptional. On the contrary, he understands these only in terms of it. The person of not being appears not to be interested in what is true as a rule, but always hunts the abnormal, the aberrant, the exotic, and in terms of these he feigns to understand the rule and the norm. He does not see the wonder of being true as a norm to be aspired to or as a rule to be upheld.

.... The person of being moves about in the world freely and joyously, wholly unentangled in himself, sometimes even wholly oblivious of his own existence—he is all the time out there, living and loving and laughing .... The person of being trusts, because there is essential integrity at the heart of existence to free him from worry and give him peace of mind. The person of not being cannot trust, because he is at all times suspecting and sniffing danger and disintegration and disaster, and therefore you never find him enjoying rest and peace.

The person of being rejoices in every achievement, in every truth, in every positive existence, wherever and however it turns up.... wishing it from the bottom of his heart stability and continuance, and himself aiding it where necessary towards that end. Therefore he never envies, his eye is not evil because somebody else is good, and he recognizes no enemy whatever except darkness and not being.

To the person of being there are holy things which should not even be touched.

The person of being knows perfectly the absolute insufficiency and precariousness of his being and of every being— he therefore seeks, thirsts after, and demands some secure independently existing good to sustain and guarantee his being and all being.

Because he is turned, in his inmost heart, toward the fullness of being, the person of being is full of hope.

When you show a person of being Florence or Rome or the great cathedrals, when you take him to El Prado or the British Museum or to the Metropolitan Museum of Art, when you place in his hands Plato or Shakespeare or Tolstoy or the Psalms or the Gospels, he is profoundly grateful. When you put before him the great manifestations of culture and art, life and civilization, *in ancient China, and Athens before Christ, in Rome in the first century, in Europe in the 13th century, in England in the Elizabethan period, in Paris in the 17th century, in North America in the 19th and 20th centuries, he is filled with awe.... Transported into another world full of stillness and meaning—a world of peace and creativity and life, a world of being, of God—a world of which these marvels, wonderful as they are, are nevertheless mere shadows and reflections and merest fragments, and he is profoundly grateful

The greatest being is a total person, a whole person. And that is why politics is such a real business; at its best it deals not with ideas and objects and things but with real persons. Put a human person before a person of being, and the person of being comprehends him as a whole, absolutely amazed at his being. Put this same human person before a person of not being, and the latter at once breaks him up into his elements, into his different aspects, into the influences that shaped him, into his net worth, into the functionings of body and mind and background and society. He deconstructs and decomposes him in this way until nothing of his being is left before him. That is why the person of not being can never wonder and love, because one can only love and wonder at being.

No person of being will fail to be arrested by the phenomenon of Jesus Christ; no person of being can have enough knowledge and experience of Jesus Christ. He will therefore seek everything he can possibly find on him and about him—in the Bible, in the church, and in every historical-cultural manifestation. Here you have personal existence in history and time, confident, sure, unhesitating, full of matter and content, without the slightest attempt at coercion. Here you find yourself engaged personally-existentially at your deepest.

The person of being has no desire to explain Jesus Christ away. He is attracted by him as by nothing else. Jesus Christ powerfully convicts us of our sin and rebellion, yet no matter how much the person of being is thus convicted and shattered in the presence of Christ, he is never tempted to replace him with someone or something "safer"; he is never frightened or driven away by him....

.... In our heart of hearts we crave nothing more than to become authentic persons, to become intimately relational, to be repentant, to be forgiven, to enter life eternal. And yet modern existence diminishes and dissolves the person into his components, has no room whatever for repentance, never seeks forgiveness, and as for life eternal, this existence "lives" only for the moment or, at most, for the near future. This measures the magnitude of the anti-Christian revolution amidst which we are living and have been living for two thousand years. For Jesus Christ evokes in us nothing other than personal being, repentant being, forgiven being, and eternal being.

The greatest event in history .... is his resurrection on the first Easter morning. This event utterly debunks the world and everything in it, proves its absolute lack of self-sufficiency, and provides the greatest real hope there is.

Do we find Jesus Christ everywhere—in nature, in history, in art, in our personal trials and sufferings, in our miseries and in our triumphs, in every human law and culture? Only the new creature, born from above, "born of the Spirit," can see everything in Jesus Christ and Jesus Christ in everything. And only this new birth and this mode of seeing in and through Jesus Christ is new in history. If you take him at his word, then nothing can be the same again for you in the world and in your life.

The Maker of heaven and earth is before you; the Creator of everything in the universe, visible and invisible, is before you; the Fullness of Being is before you. God himself, who took on human form to free us from not being, adopts us and grants us, through his resurrection, life everlasting with him, and victory over the Devil and his works. He is before you. What can the thankful believer then do but fall on his knees and repeat from the Divine Liturgy:

For unto thee are due all glory, honor and worship,

now, and ever, and unto ages of ages.