I Wanna Go To Sound City (Part 2) by Julie Moore 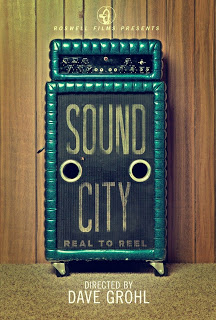 If you are my friend on facebook, you know that I struggled with the entry on Sound City I posted last Saturday.

I watched and rewatched, wrote and rewrote, cut, copied and pasted... I was driving myself nuts trying to organize my reflections. I guess the problem I had was ... just that I had so many different thoughts about it... and I would be writing about one thing, and meander off into some other territory...

And the whole time I was dwelling on it all, I was fully cognizant of the fact that it was kind of weird that I would compare the Christian life to the making of rock and roll records. But ... rock and roll does tend to inspire fervent devotion from its... devotees. I'm not sure why – I just know how it makes ME feel.

And I'm obviously not alone. This film has everything – reverence, shrines, pilgrimages, relics, saints, evangelism, heaven... See, in the latter part of the action showed how Dave Grohl heard that Sound City was closing, so he purchased the revered Neve soundboard (relic/shrine) for his own personal studio. 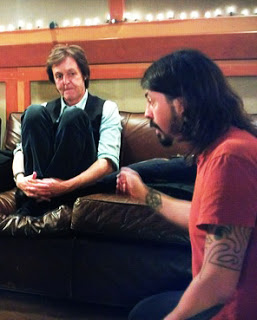 having fellowship
Then, he invited a bunch of the people who had recorded at Sound City to come to his studio to make a record. And they made the pilgrimage. Stevie Nicks. Rick Springfield. John Fogerty. Paul McCartney. All the saints. I loved the part where the guys from Nirvana were jamming with Paul McCartney and they slipped into a familiar groove... and Dave looked over and was like,"Wait... Paul McCartney's here?!"

Of course, I have no idea what heaven is like, but I love to imagine that in addition to my dear departed loved ones I will get to hang with many other of God's saints... have tea with C.S. Lewis, run on the heavenly shore with Eric Liddell, sing with Bono (I know he's not dead yet... plus I can't sing worth crap, but it's MY vision of heaven, right?!)

Anyway, the musicians all jam in different configurations and we get a peek into the creative process. Brad Wilk from Rage in the Machine urges us to explore the works of rock's founding fathers – to carry our appreciation to its roots. Rick Rubin tells us to be true to ourselves, and spread the good news personally.

And in one of my favourite quotes of the movie, Neil Young, in a fit of evangelistic fervor, tells us what it's all about: "Let's rock, let's play, let's record, let's play it back. 'Wait 'til you hear this.' I can't wait to get in my car to here this. I'm gonna play it for my friend. I'm making a copy. I'm gonna blast it for f*ing 10 hours and I'm gonna listen to it.

See? It's all there! And I'm really not sure why... but again, I know how I FEEL. Of course I've written more than once – including in the last blog post – about the salvific role rock and roll has played in my life... just like Jenny in the Velvet Underground's Rock and Roll – "Jenny said when she was just bout five years old / You know my parents are gonna be the death of us all / Two TV sets and two Cadillac cars - / Well you know it ain't gonna help me at all Not just a little tiny bit / Then one fine mornin' she turns on a New York station / She doesn't believe what she hears at all / Ooh, She started dancin' to that fine fine music / You know her life is saved by rock 'n' roll, / Yeah, rock n' roll / Despite all the computations / You could just dance to that rock 'n' roll station...And baby it was allright..."

But rest assured, this rock and roll salvation – well, it's salvation with a small "s". More of a diversion, really. I have actually wondered since I was just twelve years old whether my love for the stuff constitutes idolatry. And ... well, I hope not! I mean, it means a lot to me... but not everything. I could certainly live without it. It was just... a lifeline when I was sinking. It gave a lonely outcast a bit of sunshine when every day was gray.

And even though it's been called the devil's music, I think it actually pointed me to God. In C.S. Lewis' The Voyage of the Dawn Treader, Aslan tells the children that they have to go back to their own world, but that he'll be there too. Aslan says, 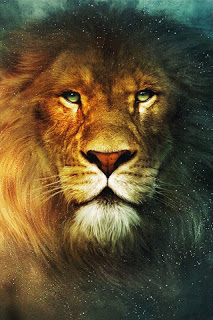 "There I have another name. You must learn to know me by that name. This was the very reason why you were brought to Narnia, that by knowing me here for a little, you may know me better there"

And no, rock and roll was not a wardrobe to an alternate universe where I met a Christ figure, but it did give me a sense of home... a place I belonged... when my own world didn't serve me well. So that when I finally came to my TRUE home, that is Christ, I recognized the feeling.

And, it being art, and full of soul, I think rock and roll was the vehicle through which I learned to worship... to look for meaning, to weigh it in my mind, and to let my heart soar in response to something outside myself.

Sure, it's made him a gazillion
dollars, but even Mick Jagger 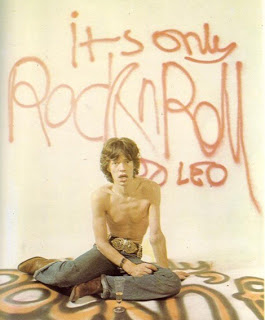 knows it's only rock and roll.
Yes, rock and roll as a savior – and as an art form – is limited. It never died for me (naked, stoned and stabbed), nor can it actually Save me – with a big S. It's kind of like the part of Sound City where Dave Grohl talks about how Trent Reznor uses computer technology as a tool rather than a crutch. Just so, I like rock and roll for what it is... a style of music that I enjoy and subculture that fascinates me... not as a Saviour.