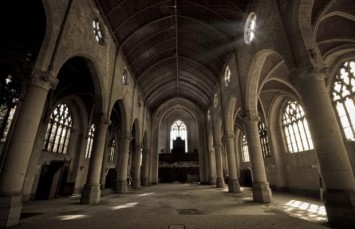 From time to time I will have the people I'm discipling write out their own pastoral obituary. I ask them to write out how our enemy would take them out, rendering them unable to serve their family and communities. As you can imagine, the answers vary, but it always serves as a really helpful exercise as they are forced to confront issues of character, etc.

Taking the same exercise I've used with pastors, for the past year I've been thinking how the enemy would/might be trying to take down the American church. Now what I've noticed is that the original temptations Jesus faced (which can best be boiled down to Appetite, Affirmation and Ambition) are somehow warped and insinuated into the culture. As each culture is distinct and different, a smart enemy would come at each culture in subtle ways, tempting them in ways they don't see or expect, and with things that would look different from culture to culture.

For instance, the issues the European church deals with are actually quite different than the ones the American church is dealing with...even though often times they are put under the same broad umbrella of "Western Church." Sure, there are some similarities, but the attack is different. More nuanced.

But those original temptations of Appetite, Affirmation and Ambition are slowly insinuating themselves into everything we call CHURCH. We just often don't recognize it or see it.

And so this is how, if our enemy gets his way, the American church could be taken out:

A culture of CELEBRITY (affirmation)

A culture of CONSUMERISM (appetite)

A culture of COMPETITION (ambition)

The idea of celebrity is deeply woven into American culture and values. All you have to do is look at the ridiculous nature of Reality TV and you see how Americans are constantly craving celebrity (either to be a celebrity or to find the next celebrity and stalk their every move). Now there is nothing dark or sinister about "celebrity" in and of itself. You can't find an argument that says Jesus wasn't a huge celebrity in his day.

However, there is a difference between being famous and being significant. If Jesus was famous, it's because he was doing something significant. The problem with many pastors is they make decisions, develop personas and define success from the lens of what will make them a celebrity/famous (even if they don't know it or see that they are doing this). So in American church culture, it's pretty easy to become a celebrity: Grow a HUGE church. Now all in all, it's not terribly difficult to grow to be a giant church if you have the right tools at your disposal...but that doesn't mean the ends justify the means of getting there.

For instance, though Jesus was a celebrity in his day, he was willing to say things that ran people off in droves. In fact, the book of Mark chronicles the way (from about the mid-point of the book on) how people left Jesus to where, at the end, virtually no one was left. No one wants to be associated with him for fear of the consequences. That's not something you see too often in American churches.

I suspect it's because riven deeply into the American psyche is the desire to be a celebrity. And American pastors are very susceptible to this. Many subtle things happen in people who desire to this kind of celebrity status:

They can disengage community and isolate themselves, setting themselves up for moral failure.

They can make decisions that are numbers driven and not always kingdom driven.

They can skew to a shallow understanding of the gospel as opposed to a holistic one that leads people to discipleship.

They can put the good of their church (their personal kingdom) over the good of God's Kingdom.

Question: In what ways are your decisions made by a subtle undercurrent of ambition and a hope for celebrity?

We live in a culture that revolves around consuming.
Every TV commercial, every store, every credit card company, every bank, every TV show or movie...every everything is tailored to fit your desires, needs or personal preference. We are easily infuriated when things don't happen exactly as we want them. We exist in a place that implicitly says this: "We are here to serve you and meet your every whim and desire. Let us take care of you." What's more, it's never enough.

Eventually the house or the car get older and we want new ones. The clothes aren't as fashionable and we want something more in style. That restaurant is getting boring, we must find another. And on and on and on. This is how we are wired to think in the United States. And it is all backed up by this rationale: You're worth it. You deserve to have what you want, how you want it, when you want it. And for the most part, the church plays the exact same game.

We do as best we can to provide as comfortable an experience as humanly possible, using every means at our disposal to attract them in (and then keep them in). So we tailor what we do around their wants and desires. That's Marketing 101, right? The problem is at the end of the day, the only thing that Jesus is counting is disciples. That's it. He doesn't seem to care too much about converts, attendance, budgets or buildings. It's about disciples. And, by nature, disciples are producers, not consumers.

Yet most of our churches are built around feeding consumers. I'd argue 90% of the church's time, energy and resources are linked to this. But the issue is this: The means you use to attract people to you are usually the means you must use to keep them. In other words, if you use consumerism to attract them to your church, it often means you must continue using it to keep them...or else they will find another church that will meet their "needs." And yet...that consumer mentality is antithetical to the gospel and to the call of Discipleship.

Disciples aren't consumers, they are producers. Jesus cared about disciples more than anything else.

Question: In what ways is your church community using consumerism as the means to draw people to a gospel that is, in and of itself, anti-consumerism?

You will never find a more hyper-competitive culture than you do in the United States. As a foreigner living in this land, I can attest to that with the utmost respect. Americans love to win, they love the struggle of the journey and love holding up the gold medal of victory. Now don't hear me wrong, there's nothing wrong with being competitive, it's just how competition has become warped and twisted within our culture. And it's that, at least in the church, we are competitive about the wrong things.

Much of the American church finds itself competing with the church down the road. "Are we bigger than them? Do we have more influence than them? Do we have the best/biggest youth group in town?" The fact of the matter is that there is a battle. We do have an enemy and we should be competitive...but against our enemy! What we haven't seen is how crafty he is. This seems to be the alliance he has struck with the American church: "I'll let a good chunk of your churches grow...just not at the expense of my territory." And so what happens? 96% of church growth is due to transfer growth and not churches striking into the heart of our enemy's territory. We'll consider it a win because we have the new service or program that is growing...but that growth is mainly from people coming from other churches. That's not a win! That's a staggering loss. Furthermore, for many pastors, we don't think we've won until we've won and someone else has lost. Seriously?! For sure, we have an enemy and we should be competitive, but we should be competing against our enemy, knowing that the final battle has already been won, and not competing against our own team members.

So gifted and skilled is our enemy, so conniving is he, that he has convinced us that beating the people on our own team is victory while he stands back and laughs, rarely having to ever engage in conflict, protecting his territory. He is beating us with a slight of hand, with a clever distraction, turning us against ourselves.

Question: In what ways are you competing (both in actuality or simply in your mind) against people who are on your own team?

In all honesty, it isn't that the American church will ever truly die or cease to exist. It will always be there. But it is entirely possible that if these three critical issues aren't addressed and dealt with, it will be a hallow shell that is spiritually listless.

If we think through Celebrity, Consumerism and Competition, the anti-body against all of these is sacrifice: learning to lay down what builds us up and giving to others instead. "Learning to serve, rather than to be served." Looking for anonymity rather than celebrity. To build a culture of producers rather than consumers. To live in a vibrant, sacrificial community fighting a real enemy rather than competing against the same community God has given us to fight with. It's about sacrificing what we want for the glory of God and the advancement of His kingdom, regardless of our advancement or desires.

Clearly this is what Paul was getting after in Philippians 2:6-11 when describing the attitude of Jesus as taking on the attitude of a servant, willing to sacrifice all acclaim and equality with God. It was a willingness to set aside and sacrifice celebrity, consumerism and competition at the altar of the incarnation.

Will we have the courage to sacrifice as Christ sacrificed? Will we do the things that cost us so that his Kingdom may advance?