I Guess I'm Counting on His Divine Intervention: A blog by Julie Moore 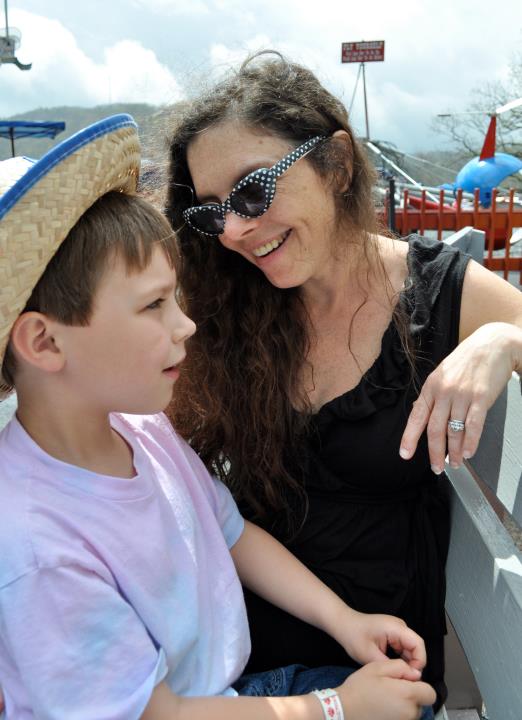 Let's start with a rockin' good tune ('cos you may think that everything that follows is pure-T crazy):

Now, since you may not already think I'm crazy enough, I'm going to tell you about some times I feel that I actually encountered the Living God. The world is full of people who will say, "God told me this" and "I had a word from the Lord that..." but how often does this really happen? I'm no expert in divine intervention, but in my own experience, it is very rare and often very subtle.
Yet there are a handful of times where I am convinced that God "spoke" to me... Two incidents really stand out to me. One occurred when I was a brand spankin' new Christian and began dating a guy who was an atheist or an agnostic or... just not interested... He was a very nice person, very solicitous of my preferences, and we had common interests, so we spent a good deal of time together. We even went on a trip ... but in the middle of the three-day trip I suddenly felt like ... I just couldn't breathe.
I realized later that it was what they call the "conviction of the Spirit." I suddenly knew that the relationship was not what God wanted for me, and that I should get out of it. Of course, we were 5 hours from home, so... I didn't feel like rocking the boat right away... But the whole day I found myself pretty much unable to talk. I tried to maintain a pleasant demeanor, and answer questions politely, but that was all I could manage, really. Finally at the end of the day, I told the very sweet guy that we couldn't keep dating... Of course he was very kind about it, because that's the kind of guy he is. And it was rotten of me... but I'm telling you, the relief I felt was like plunging into a waterfall on a scorching hot day. I will go so far as to say it was a physical feeling. Maybe it could be explained as simply as this: I had a severe attack of conscience, and then felt relieved. But I like to think it was a real intervention. Maybe because I like to think that God actually cares about my development...?

The other incident occurred when, after years of tightly controlled eating (or not eating, as the case may be,) I started to eat and eat and eat. My mind thought I just needed to regain control, but ... I think that God knew what I actually needed - rest. I woke up in the middle of the night knowing that I needed to take a long rest from my strenuous workouts. It was something I could never have come up with on my own, but it was very real. Resting and feeding my hungry, exhausted body provided just the healing I needed.
These are my big two. You will meet other people who will tell you how they have encountered Jesus. The late writer Reynolds Price, just before he began radiation treatment after having a 10-inch tumor removed, had a dream of Jesus baptizing, forgiving, healing him. C.S. Lewis's wife Joy Davidman was struggling with her alcoholic first husband and trying to raise two young boys when she had a clear sense of a "presence" in the room with her at one dark point in her life. Later when she began to read the Bible, she recognized Jesus as the one who had been in her room.
For most people, encounters with God are not so much like Paul being struck blind on the road to Damascus, but more like... that still small voice you always hear about... or a feeling - like in Wim Wenders' movie "Wings of Desire" where a person feels a sense of peace when an angel stands next to him... or an idea that you never would have had on your own.
There are other, less striking times that I felt like maybe God was close by (of course He's always there - maybe I'm just not feeling Him)... I read a book called "The Sacrament of the Present Moment" by Jean Pierre de Caussade which held that God is speaking to us and leading us in every moment, we just need to listen. It's a beautiful thought but I wondered, "Is God really involved with the minutiae of my daily life?" I was thinking this as I was getting dressed for work and started to debate in my mind over whether His inspiration could show me what to wear. I was working at a jeans-and-t-shirts type place, and the t-shirt my hand settled on was one from Tom Petty's "Full Moon Fever" tour, featuring a drawing of a cow jumping over the moon. And during that day at work, people in every department made comments or gave me compliments about it... I'm not saying that God was necessarily behind my shirt selection, but I wouldn't be surprised if He wanted to me know that He COULD be part of something so small.
Another time I was driving in the car, pondering over the big decision of getting married and the song "Hey Jude" came on the radio... "Hey Jude, don't be afraid / You were made to go out and get her / The minute you let her under your skin / Then you begin to make it better" I know it's silly, but I felt like I was being personally addressed. Of course you'd have to substitute "her" with "him," but it worked for me!

I also want to add that there have also been times when I wondered where God was... I was inconsolable and could not detect God's presence in any way... I believe this is what St. John of the Cross called, the "Dark Night of the Soul." I am thankful that such times don't go on forever... Usually some type of resolution is reached, satisfying or not. I always learn something, anyway.
You see, I think that it's not that God CAN'T show up for us, or doesn't WANT to jump in and fix all our problems... I think it's that He wants us to learn and grow, and stretch our faith. I imagine it's like me wanting to rescue and help my kid with every little thing... If I keep doing that, how's he ever going to learn?
Sure it would be a lot easier if God just showed Himself all the time, and went around fixing all our problems, but ... what would our faith be worth then? And even if I'm making it all up in my head, then... well, I guess that shows God that I believe He's the awesome and sweet kind of God who care about me enough to show up in person occasionally... Come to think of it, isn't that what He did a couple thousand years ago?