A Love Supreme by Julie Moore

I had a particular thrill this weekend when I saw my own name in the credits of a movie. And it was really referring to me... not to some other Julie Moore. It was a rush, I tell you. I felt happy to be part of making the film, Blue Like Jazz. I wrote about it earlier, here, but that was before it came out. So now I need to complete the circle by sharing my reaction with you, having seen the movie.

First of all, I'll tell you about how I was hanging out with Grace and Bill on Friday afternoon when the phone rang and...

to my surprise, it was THE DIRECTOR OF THE MOVIE STEVE TAYLOR! It seems they were calling everyone one of the I don't know how many people that gave any money at all for the movie. I mean, I didn't give much, so if they called me, well... they must have been calling everyone! And let me tell you, that guy is NICE...! I had no idea that he was a pioneer of contemporary Christian music, but Grace filled me in on that. Anyway, it super-psyched me for the movie, which I had planned to see on Sunday. I was quite fortunate that it was even showing in my area. Being an indy film, it didn't have the theatre presence of a major studio release.

Anyway, Grace and I went together while Tom took Bill to see The Three Stooges. Of course, Tom had to point out that The Three Stooges movie got better reviews than what he called "your movie." But you know what? I reeeeally don't care. As I said before, all I care is that it tells the truth. And it does. Besides, how many movies is HE in the credits of? And when has a movie's director called him on the phone?! (Although I will say that he was an extra inBull Durham back in the day!)
Anyway, so Grace and I go in, and (hooray!) get to sit with a couple of people from church who were there... They wondered aloud why no one at church was talking about it... Well, as the movie started, about a hundred reasons they might not have pushed it paraded across the screen... Now I'll be the first to say that Christians can be a touchy bunch. I remember a while back a mom I was chatting with at church being disgusted thatThe Lion King contained the word, "butt," which she spelled out when she was telling me about it. So how do you think some of us are going to react when we see a giant condom on the steeple of a church, or people being declared pope and taking confessions? Or Christians blatantly mocked at every turn.
Well, I'll tell you how I took it... even though I'm not exactly your best gauge of what's offensive... I laughed a little bit and I tried to analyze it a lot. The story follows Don, a Southern Baptist from Texas who, after discovering that his mother is having an affair with the church's youth pastor, flees his upbringing for the wildly liberal Reed College in Portland, Oregon. Now, it's loosely based on actual events from the life of author Donald Miller, so ... it's not like they pulled the story from thin air. Don worked on the script, so you know it's not going to veer far from the author's intent.
And I saw many things I know to be true. I know that I, too, am often ashamed of some of the crazy things Christians do... including myself. I am sorry that I have given Jesus a bad name more than once... when I have not loved as I should, most particularly. I have been through times when I ignored Jesus altogether in favour of a freer lifestyle - not realizing where real freedom actually comes from. There have been times when I have denied Him to make myself look cooler. And I don't even have the excuse of being just a young kid. This happens even now! I mean, I don't say, "I don't know the man!" like Peter did, but I do sort of refrain from saying somethings because I want people to think I am cool. Which I am not, of course. Everybody knows that! And at my age, should I really be worried about being perceived as cool? 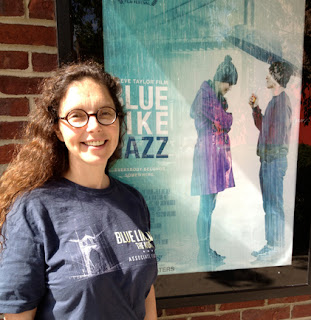 But Blue Like Jazz is about a kid. It's a coming-of age-story - common enough for the movies. In the early part of the movie, I get the feeling that Don is just sort of going through the emotions...  Having been raised in a strict Evangelical church, he just goes with it. The culture of the church is his culture. After experiencing his grand disillusionment, he is ripe to be swept up into the wild culture of his new college. He doesn't just hide his background and beliefs; he denies them altogether. He wants to blend in. He wants to be wild. Now the college with its rabid activism, whimsical social whirl and relativistic world view, are his culture. Like the folks in Judges, he does what is right in his own eyes... like a child who acts out without realizing that others are affected by it. So Don's first step in "coming of age" is to develop self-awareness... which he does after a particularly juvenile prank on a local church.
Moving along, Blue Like Jazz flows easily into a coming-of-faith story. Don must now develop God awareness. Not that he wasn't aware of God before. More like... At this point, God may have seemed like the source of his disillusionment, and also irrelevant to his new scene. After making friends with a Christian girl at Reed, he vacillates... between his new found freedom, and, I think, pleasing her.
One scene I thought was very sweet was when he is in the Christian girl's dorm room, and finds the album, A Love Supreme by John Coltrane. It's a record he has heard a gazillion times... His father is a big fan, loving it as a sublime work of art... And Don is sort of looking at it, and in the background is an icon photo of Jesus. Now, maybe it's a little too obvious, but I loved it. But in this moment, the phrase "love supreme" takes on a whole new, divine meaning.
Many times I find myself swimming in my own shallow little pool, skimming the surface of life, taking in things, without realizing what they are all about. It can be welcome revelation to realise that there is more going on, that a supreme love is available to me on an ongoing basis. It is all around me, directed straight at me and speaking my language.  Of course, it can also be a little frightening. Van Morrison's Caravan says, "Switch on your electric light / Then we can get down to what is really wrong." Yep. Sometimes God awareness brings sin awareness. When Peter first knew what he was dealing with, he said, "Go away from me, Lord; I am a sinful man!" It's no co-incidence that Don's journey back to God begins with a long confession. Fortunately, Jesus's response to Peter and to us is, "Don't be afraid!" I'm guessing it's because of that "love supreme," doncha know...
Anyway, I guess since this is a movie review, you'll be wanting to know if I recommend it. And, yes, I do. I also recommend that you cast aside any expectations or preconceived notions you may have of it. It's not a preachy movie from the mold of Courageous, not is it a wild romp of a crazy college kids movie like Animal House (I'm showing my age, aren't I?!) No, it's subtler and harder to nail down than that. So just take it in. Let it wash over you... as if you were lying on your bed in the dark listening to a John Coltrane album.