Beer and Jesus by Julie Moore 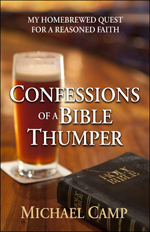 I love books. In fact my perfect day consists of lying in bed, (or by a pool or on the beach or in a hammock) reading a book. I enjoy a wide array of genres, including (but not limited to) memoir, essays, history, fiction, historical fiction, fantasy, chick lit, classics, Christian...  And in this last category, I tend, like probably most people, to read books that go in the general direction I am already going.


For instance, I need a lot of love and grace and tend to view God as the Author of love and the Giver of grace, so I steer clear of books about how to be more holy or disciplined, choosing instead to inhale books about God's love and grace... Books like What's So Amazing About Grace by Phillip Yancey, or All is Grace by Brennan Manning. So, when I was given, "Confessions of a Bible Thumper: My Homebrewed Quest for a Reasoned Faith," by Michael Camp, and was told it was about (among other things) microbrewed beer, I thought, "This should be right up my alley!" I mean, I love a good local brew (or a good old PBR for that matter!) And I love the Bible, right? I did love the format of the book, and Camp's appreciation for beer and for our gracious God, but this book turned out to be a little more than I bargained for.


The format includes first-person autobiographical stories about Camp and how his very interesting experiences and studies over time led him to a broader understanding of Christ and Christianity... interspersed with conversations had with friends at a funky Seattle microbrewery, while quaffing quality ales.

According to his Amazon Bio: Michael Camp is a former evangelical missionary, aid worker, and church leader, who lived in Africa for seven years, including assignments in Somalia, Kenya, and Malawi. He has worked for Food for the Hungry, World Concern, and World Vision. Camp studied missions at William Carey International University and Fuller Seminary and earned a Masters degree from Eastern University.

So his background is solidly evangelical. Sadly, he was also involved in some churches that left him with a bad taste of legalism in his mouth...  churches where you have to conform in superficial ways as well as doctrinally. Everyone looked alike and questions were frowned upon. I won't deny that such a place can be a toxic environment. I, on the other hand, from day one, have been in a church with a diverse membership, and have been in discussion classes where questions and opposing views were aired and debated with grace rather than judgment.

That is not to say that every Christian I have met or in our church is a wild, out there Christian that slams brews and listens to the New York Dolls. I have met and been judged by plenty of well-meaning Christians who've bought into the evangelical subculture. Of course I've also met and been graciously received and loved by plenty of these Republican, teetotaling, allergic-to-cussing, Veggie-tales-watching, Elisabeth-Eliot-reading, pro-life, Amy-Grant-listening folks. As a matter of fact, a couple of those descriptors might even apply to me... and I'm not saying which ones!

Anyway, Mr. Camp has some serious problems with some of the more controlling of these folks, and goes into detail about the things that happened to him and how he learned to study the Bible and all its linguistic and cultural details... and how he came out the other side with a completely different outlook on the place the Bible should have in shaping our faith, on current sexual mores, on end times theology, on evolution, and on Universalism. 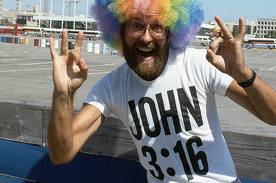 I love his huge view of God's grace, but even though my church is a big ball of love, I guess I have just absorbed too much of the "subculture" to follow him every where he went in this entertaining ramble. When he argued that everything predicted in the Revelation of St. John already occurred, and Jesus won't be coming back to get us anytime soon, all I could think was, "but I'm so tired!"

And when I read his plug for Universalism, (that is, Jesus died for everyone's sins regardless of their acceptance,) I just couldn't wrap my head around it. He said that when he shares this with Christians, he thinks they should be jumping up and down! And I certainly would, if I could follow his arguments where they led. While there ARE some verses that imply universality, there is just so much in the Bible that does NOT point to this. Take this famous verse, John 3:16: "For God so loved the world that he gave his one and only Son, that whoever believes in him shall not perish but have eternal life." Or this: "Whoever believes in the Son has eternal life, but whoever rejects the Son will not see life, for God's wrath remains on them." (John 3:36) This hard teaching is also hard for my head to embrace, but that's what it says. But God is not asking me to jump through any kind of hoops - just believe. This is one place I could agree with Mr. Camp - that the modern evangelical church has issues that it makes do-or-die when they aren't really - it's just more legalism, and this is something that distracts us from the love of God and sharing it with the whole world.

There's a good chance that I misunderstood Camp's assertions or his reasoning, BUT if Universalism is the universal rule, then why do I bother to share the good news of God's love? Because knowing the gospel and living for Jesus is a good life for people? Does that mean we are really just selling a lifestyle? Isn't that a job for Madison Avenue? The Christian life has actually been kind of hard for me. Very good, but also very hard.

Lots of soul searching, hard choices and being shunned...
And I find it hard to believe that Paul and the apostles of old, and all the martyrs throughout history would have worked their asses off and maybe died sharing their faith, for just a lifestyle. Maybe I am one of those uptight people described in the book that can't embrace these views, I don't know. I do know that Jesus is worth knowing, even if we don't need to.