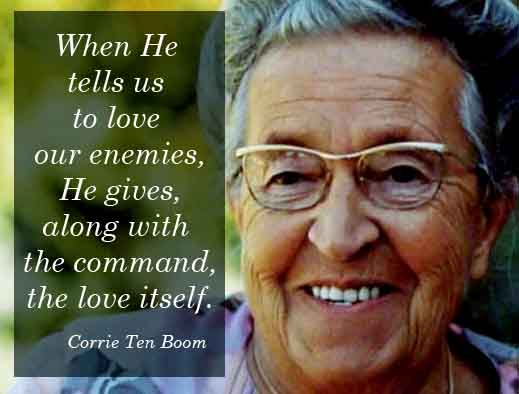 "You have heard that it was said,
"You shall love your neighbor and hate your enemy.'  But I say to you, Love your enemies and pray for those who persecute you, so that you may be children of your Father in heaven; for he makes his sun rise on the evil and on the good, and sends rain on the righteous and on the unrighteous.
For if you love those who love you, what reward do you have? Do not even the tax collectors do the same?  And if you greet only your brothers and sisters,  what more are you doing than others? Do not even the Gentiles do the same? Be perfect, therefore, as your heavenly Father is perfect. Matthew 5
Love thy enemy (an excerpt from Tramp for the Lord by Corrie Ten Boom)

Thomas was a tall black man who lived in a round hut together with his big family in the middle of Africa. He loved the Lord and loved people - an unbeatable combination.

Thomas's neighbor, who lived across the dirt street, hated God - hated men like Thomas who loved God. The hatred grew stronger and stronger until the man began sneaking over at night and setting fire to the straw roof on Thomas's hut, endangering his small children. Three nights in a row this happened and each time Thomas was able to rush out of his hut and put out the flames before they destroyed the roof and the walls. The fact that he never said an unkind word to his neighbor, made his neighbor hate him even more.

Other neighbor's told the chief of the tribe what had happened. The chief was so furious that he sent his police to arrest the neighbor and throw him into prison.

That night Thomas came to the meeting where I was speaking (as he had done each night). I noticed his badly burned hands and asked him what had happened. Reluctantly he told me the story.

"It is good that this man is now in prison," I said. "Now your children are no longer in danger and he cannot try again to put your house in flames." "That is true," he said. "But I am sorry for that man. He is an unusually gifted man and now he must live together with all those criminals in a horrible prison." "Then let us pray for him," I said.

Thomas dropped to his knees and holding up his burned and bandaged hands, he began to pray, "Lord, I claim thus neighbor of mine for You. Lord, give him his freedom and do the miracle that in the future he and I will become a team to bring the Gospel in our tribe. Amen."

Never had I heard such a prayer. Two days later I was able to go to the prison. I spoke to the prisoners about God's joy and God's love. Among the group who listened intently was Thomas's neighbor. When I asked who would receive Jesus in his heart, that man was the first one to raise his hand.

After the meeting I told him how Thomas loved him, how he had burned his hands trying to put out the fire to save his house, and how he had prayed that they might become a team to spread the gospel. The man wept big tears and nodded his head saying, Yes, yes, that is how it shall be."

The next day I told Thomas. He praised God and said, "You see, God has worked a miracle. We never can expect too much from Him." He left, running off down the path, his face beaming with joy.

"Let me tell you a story," I said. And then I told him of my experience when my former guard from the concentration camp asked me to forgive him. "That moment I felt great bitterness swelling in my heart," I said. "I remembered the sufferings of my dying sister. But I knew that unforgiveness would do more harm to me than the guard's whip.

So I cried out to the Lord, "Lord, thank you for Romans 5:5, "...the love of God is shed abroad in our hearts by the Holy Ghost which is given unto us." Thank you, Lord, that your love in me can do that which I cannot do. ..I could not do it. I was not able. Jesus in me was able to do it. You see, you never touch so much the of ocean of God's love as when you love your enemies."

Forgiveness is the key which unlocks the door of resentment and the handcuffs of hatred. It breaks the chains of bitterness and the shackles of selfishness. The forgiveness of Jesus not only takes away our sin, it makes them as if they had never been.

"So you have hated also. What do you suggest I do about my hate?" "What I have to say is of no importance. Let me tell you what the Son of God had to say. 'For if you forgive men their trespasses, your Heavenly Father will also forgive you. But if you forgive not men their trespasses, neither will your Father forgive your trespasses' (Matthew 6:14-15). If we forgive other people, our hearts are made fit to receive forgiveness.

When we repent, God forgives us and cleanses us." "That is easy to say, but my hatred is too deep to have it washed away." "No deeper than mine. Yet, when I confessed it, not only did Jesus take it away, He filled me with love - even the ability to love my enemy." "But there is something I must know. After you forgave your enemies, was it settled once and for all?" "Oh no.

Just this month I had a sad experience with friends who behaved like enemies. They promised something but did not keep their promise. In fact, they took great advantage of me. However, I surrendered my bitterness to the Lord, and asked forgiveness and He took it away." "Was the bitterness gone for good, then?" "No, just the next night, at four o'clock, I awoke and my heart was filled with bitterness again. I thought, How could my dear friend behave as she did?

Again I brought it to the Lord. He filled my heart with His love. But the next night it came back again. I was so discouraged. Then I remembered Ephesians 6:10-20 where Paul describes the 'armour of God.' He said that even after you come to a standstill, still stand your ground. I was at a standstill, so I decided to stand my ground and the bitterness and resentment fell away before me. I, without the Lord Jesus, cannot be victorious. I need the Lord every moment.

And I have learned that I am absolutely dependent on Him. Because of this He has made me rich." "I am glad to hear that, for sometimes my old bitterness returns. Now I shall just stand my ground, claim the victory of Jesus over fear and resentment, and love even when I don't want to." My friend had learned well the secret of victory. It comes through obedience.