As a freelance graphic designer, I serve a couple of different Money Mailer franchises and this means that I do a LOT of ads for small businesses... and one thing mom and pops feel like people need to know is how many years they've been at ... whatever they do.

Doesn't this Tower of Babel 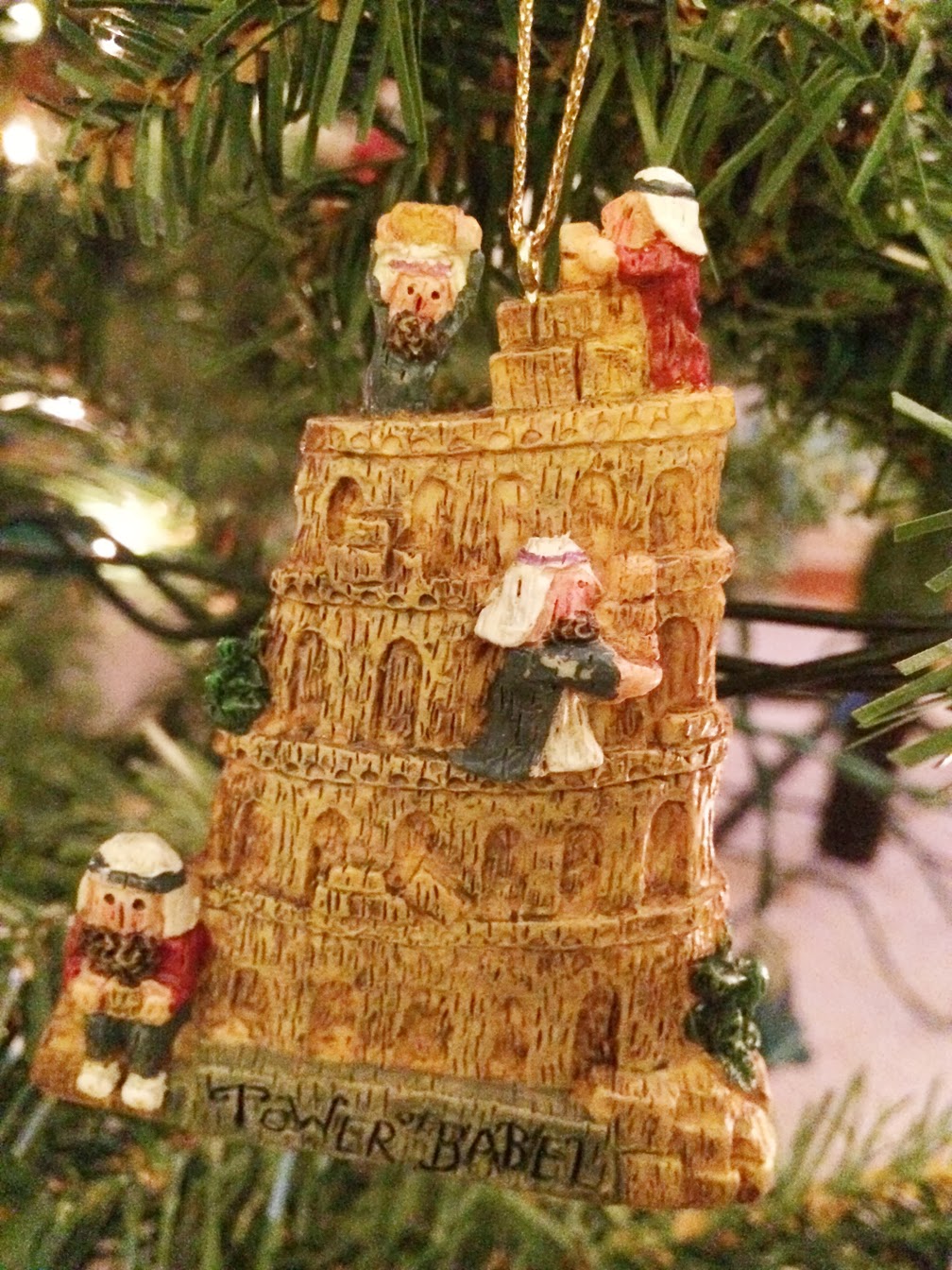 ornament look a bit like...
Because years of experience mean you know what you're doing, right? And 12 years experience is a good amount right? 'Cos that's how long I've been married. Except... that 12 years is not really a long time in the marriage business. And yet... yesterday I wrote a long-ass post about it. That's right... I tried to tell you a thing or two about marriage – that is, something I know VERY little about.

HAHAHAAA!!! If you know me at all, you're laughing too. Nonetheless, there I was holding forth. See, it all started when we were (finally) taking down the Christmas tree (January 11!) and I noticed a striking similarity between two ornaments: one of the Tower of Babel, and one of a wedding cake that I gave Tom just before our January wedding in 2002. 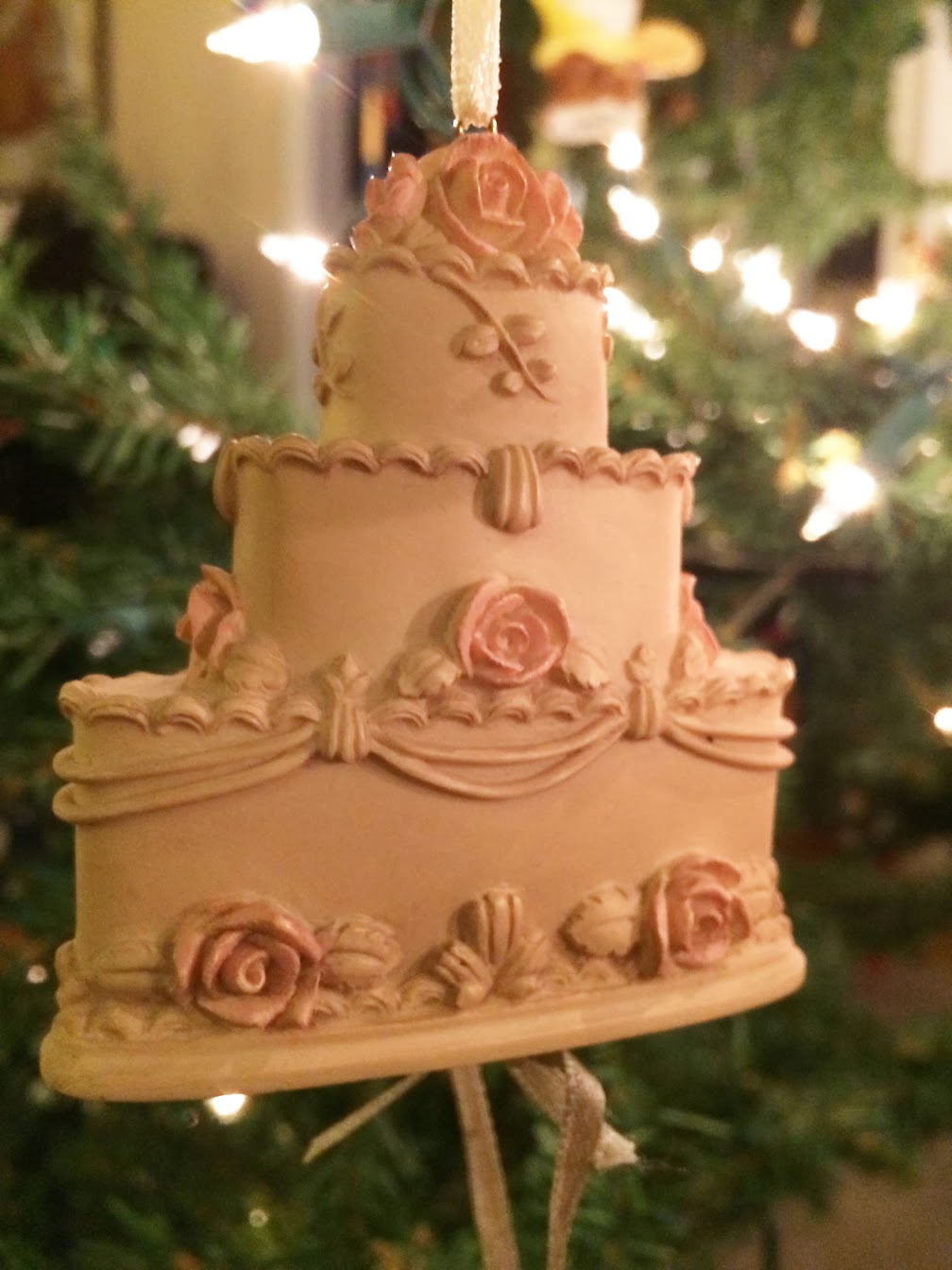 ...this wedding cake
ornament?
Of course my crazy brain being what it is, it started ping-ponging around those two things like on the BBC's awesome show Sherlock where Sherlock's brain is depicted as a lot of little noticings and words fading in then fading out? That's kind of what it was like, even though I, my friend, am no Sherlock. (No sh*t, right?)

Anyway, this crazy random coincidence of shapes highlighted three things (I think) I know about marriage – the first being...

1. It helps if both people speak the same language.

See, the story of the Tower of Babel in Genesis 11 is about some people who are trying to build a tower up to heaven. Since they all speak the same language, they're able to make a good go of it. But God says, "Oh heck no... we gotta nip this in the bud. Let's see how they do when the don't speak the same language! Bwahahaha!!!" and work on the tower comes to a screeching halt and the people run off in all different directions.

So... what if being married is like working on a task the equivalent of building a tower to heaven? Some days it seems like it, doesn't it? In that case, certainly it helps if both spouses speak the same language...

Sherlock, I ain't, but my mind
flits around like his.
For instance, when I say "holiday," I mean a day set aside to commemorate something – with the focus on the something. If a celebration isn't convenient on the actual day, another day will do – because it's all about the something. For Tom, the days themselves have a particular significance. It's something I had to learn about him, and it was only achieved by arguing over spending my birthday with him when we were dating. He wanted the actual day, but i wanted the previous weekend, as it was a longer span of time.

And believe me, this isn't the only language barrier between us. We learn new things every day. And as we begin to speak each other's language, it does become a lot easier to work together to build in this heavenward tower. Okay, so that's kind of no-duh. I mean, everybody knows that "men are from Mars and women are from Venus," right? Back when I got married, there was a pretty famous book out called The Five Love Languages, by Gary Chapman. It's still sitting on my shelf, where I put it ten years ago when I bought it. Yeah, I haven't read it, but I do know that it's about how people tend to communicate and hear love in different ways. Some talk with gifts, some with kind words... that kind of thing. So, this info that I'm giving you about "language" isn't new.

2. The secret to staying together is... NOT LEAVING!

Now I don't often FEEL like leaving, but if ever I do, this is all I have to remember. I'm not saying there's never a reason to leave, because I know that some circumstances make leaving the most prudent thing to do. But so far that hasn't happened here. So, if we're keeping up with our analogy, the secret to building the tower is ... just piling up the stones one at a time. If you quit doing that, it's never going to get very tall.

Tom and I can't do this marriage thing (ie. build a huge tower) all by ourselves! Sure, we've got love as mortar, but human love is imperfect. I mean, what if we just start feeling jaded or get tired and stop stacking rocks? I don't think we have enough love between us to hold the rocks together all the way up to heaven.

But then... can a person or a group of people actually build a physical tower that reaches heaven? I don't think so. I don't have much to go on – just some Bible-larnin' and careful ponderin' – but I think that if heaven is even a physical place – it's probably not in this dimension. That is, you won't locate it on your GPS. So, really, God was doing the construction crew back in Babel a favor – keeping them from wasting their time... because only some metaphysical track-jumping engineered by God can transport us to heaven. It sounds like I'm writing an episode of Doctor Who, but there's a reason the Catholics call these things "mysteries," am I right?

Which Doctor Who should
my episode feature?
So, I can't build a tower to heaven with rocks or with a good marriage. But, I don't think it's a waste of time like the Tower of Babel... I think God actually WANTS us to build the marriage... once we've said, "I do." 'Cos He loves Him some love.* He uses the marriage relationship to describe His own love for us, after all.

And through this herculean task, He's done me the great favor of showing me that I need Him every single day. My constant lack of love and grace and patience and basic kindness makes it painfully obvious that I can't build this or any tower without His help.

*Of course being single is cool with Him too, but that's not what I'm writing about.