'God Will Be There for Us' by Mara Gay 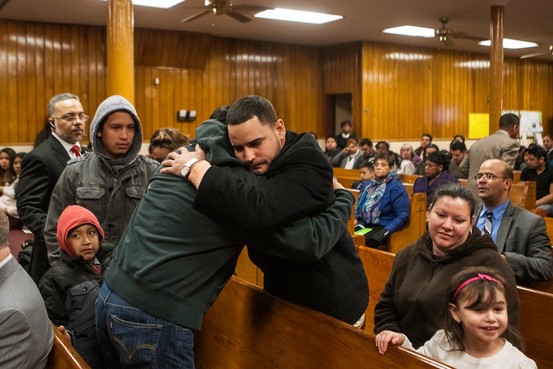 Parishioners at the Church of God worshipped with survivors from the Spanish Christian Church, which was destroyed in last week's explosion. Peter J. Smith for The Wall Street Journal

With their house of worship destroyed by a powerful explosion, and at least three of their congregation dead, Spanish Christian Church members found a temporary home Sunday for their first service since the blast—and vowed to rebuild.

The emotional service was attended by Mayor Bill de Blasio and his wife, Chirlane McCray, and more than 200 others at the Church of God, another East Harlem religious institution a few blocks away from the blast site.

"We're in pain but we also know that God will be there for us," said Carmen Vargas-Rosa, a longtime member of the Spanish Christian Church. "It's wonderful, the love that's been extended."

After the service, she added: "We're going to rebuild on the same spot."

Not far away on East 120th Street, another church, Bethel Gospel Assembly, held its own mournful service. Two of its members, Griselde Camacho, 45 years old, and Carmen Tanco, 67, were among the eight people found dead at the explosion site.

Cheers went up when a group of children sang, "The heartache is over."

As investigators on Sunday looked for clues into the cause of the blast, the church congregations packed the pews to reflect on their losses and to try to find a way forward. In raw, hours-long services punctuated with cries of 'Hallelujah!' congregants at both churches said the crisis had brought them closer together.

Rick Del Rio, pastor of Abounding Grace church, and Public Advocate Letitia James with a Bible from the destroyed Spanish Christian Church. Associated Press
Bishop Hector Chiesa of the Church of God hailed a Bible found partially burned Saturday by firefighters as a symbol of hope amid the devastation. He presented a new Bible to Spanish Christian Church's assistant pastor, Santos Mercados.

"I want to thank God for this church that received us. You are sent from God," Mr. Mercado told the assembly.

Mr. de Blasio spoke at both churches and was received warmly as he offered his support. The city was working to find long-term housing for those who needed it after the explosion caused the evacuation of more than 100 apartments.

At the Church of God, the mayor received a standing ovation as he declared, in both Spanish and English, that the city would help residents displaced by the explosion regardless of immigration status. And he said the uniting of the two East Harlem churches should serve as an example for the entire city to follow.

"In this tragedy is an example to us all of the love that permeates this city," Mr. de Blasio said. "Sometimes it's hard to see. Sometimes this place seems a little tough. But underneath we have each other's backs," Mr. de Blasio added.

City Council Speaker Melissa Mark-Viverito, whose district office is just half a block away from the site where the two buildings once stood, also visited the congregations Sunday, along with Public Advocate Letitia James, U.S. Rep. Charles Rangel and Assemblyman Robert Rodriguez.

Related
Probe Turns to Pipe Testing
For all the talk of rebuilding, the wooden pews of the Church of God were filled with anguished faces. Spanish Christian Church members listed among the dead included Rosaura Hernandez, 44; Rosaura Barrios-Hernandez, 21; and Alexis "Jordy" Salas, 22.

The service came after the frenzied hopes of finding more survivors eventually turned to grief as bodies were discovered.

One man who was injured in the explosion had a sling around his arm. A mother struggled to soothe her squirming baby as she cried. At one point, two elderly women held hands and braced themselves against one another, as the pastors spoke of all that had been lost in the tragedy.

The first funerals were being scheduled. Ms. Vargas-Rosa said later in the day that a funeral for Ms. Camacho will be held Friday at Bethel Gospel Assembly. NY1 reported that a service was held Sunday evening for Andreas Panagopolous, 43, in Astoria, Queens.

Jasmin Hernaiz, who often attends the Church of God, said outside the church Sunday that she wished there was more they could do for the congregation down the street.

"You can't take away their memories, because that's in their heart," said Ms. Hernaiz, 34. "But it's good to be able to give them some peace."