The Second Week of Epiphany: A Sermon by Steve Breedlove 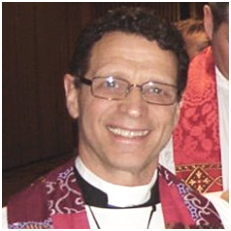 What does it mean to serve God and live in a political world?
Father Steve Breedlove delivered a thoughtful, challenging, and provocative homily on this, reflecting on the text from John 1. Worth listening to and meditating on.
Behold, the Lamb of God
29 The next day he saw Jesus coming toward him, and said, “Behold, xthe Lamb of God, who ytakes away the sin zof the world! 30 This is he of whom I said, a‘After me comes a man who ranks before me, because he was before me.’ 31 I myself did not know him, but bfor this purpose I came baptizing with water, that he might be revealed to Israel.” 32 And John cbore witness: d“I saw the Spirit descend from heaven like a dove, and eit remained on him. 33 I myself did not know him, but fhe who sent me to baptize gwith water said to me, ‘He on whom you see the Spirit descend and remain, hthis is he who baptizes gwith the Holy Spirit.’ 34 And I have seen and have borne witness that this is the Son9 of God.”
Jesus Calls the First Disciples
35 The next day again John was standing with two of his disciples, 36 and he looked at Jesus as he walked by and said, “Behold, ithe Lamb of God!” 37 The two disciples heard him say this, and they followed Jesus. 38 Jesus turned and saw them following and said to them, j“What are you seeking?” And they said to him, k“Rabbi” (which means Teacher), “where are you staying?” 39 He said to them, “Come and you will see.” So they came and saw where he was staying, and they stayed with him that day, for it was about the tenth hour.10 40 lOne of the two who heard John speak and followed Jesus11 was Andrew, Simon Peter's brother. 41 He first found his own brother Simon and said to him, “We have found mthe Messiah” (which means Christ). 42 He brought him to Jesus. Jesus looked at him and said, “You are Simon the son of nJohn. You shall be called oCephas” (which means pPeter12).

The Second Week of the Epiphany by Fr. Steve Breedlove