Woe Is Me! I Am So Homesick! by Julie Moore 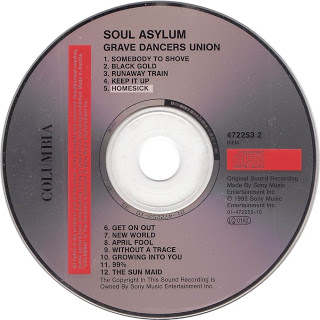 Expositing an album (in this case, Soul Asylum's Grave Dancer's Union) seemed like a good idea when I started...

and I really love that I have ten blog topics that I don't have to rack my brain for. Not to mention that I really do like doing it. Like I said, it's my superpower. The only drawbacks I can see are that 1. you, the reader might get kinda tired of it, and 2. I'm starting to wonder if I sound preachy... or more preachy than usual, anyway...

That's absolutely not how I want to come off... so... I hope I am wrong about it. It's just the natural progression of my thoughts when I'm expostulating on the these tunes.

Anyway, next up... (Click the link to hear the song)

We are not of this world
And there's a place for us
Stuck inside this fleeting moment
Tucked away where no one owns it
Wrapped up in a haste,
And by mistake got thrown away
And oh, I am so homesick
But it ain't that bad
Cause I'm homesick for the home I've never had

And we are not of this world
And there's a place for us
Stuck inside this fleeting moment
Tucked away where no one owns it
Wrapped up in a haste,
And by mistake got thrown away
And oh, I am so homesick
But it ain't that bad
Cause I'm homesick for the home I've never had

And though I would not take it personally
It's just the child in me
I never really knew how much I had
And woe is me, I am so homesick
But it ain't that bad
Cause I'm homesick for the home I never had

Let's go!
It's a lovely lament, a heartfelt cry of longing for heaven... that perfect world where everything will be... perfect. I totally dig where the singer is coming from, and I wrote here about that very thing. I would point out (again) that Paul wanted it too: "I desire to depart and be with Christ, which is better by far..." (Philippians 1:23)

The singer knows that his yearning stems from the fact that "we are not of this world," which is just what Jesus said of His disciples: "They are not of the world, even as I am not of it."(John 17:16).

C.S. Lewis nails it.
I'm not going to dissect the song and examine it too closely... It's not a statement of theology. In fact, the words imply that the singer may not cling to any specific creed: "And now I know there are no secret tricks. No correct politics. Just liars and lunatics."

I do kind of agree with this ... after all, there ARE no secret tricks... I'M not keeping it a secret, anyway. That is, I'm telling you right now... it's just Jesus. And as for politics, I know devout, well-meaning Christians on each end of the political spectrum and at every point in between. It's just the following line I have trouble with... I mean, ever heard that adage that since Jesus said He was the Son of God, He was either 1. the Son of God, or 2. a liar, or 3. a lunatic? I think we know which side I come down on here.

So, I'm not going to dwell on that part of the song. I'm just going to say that the singer's longing for heaven is a "tell" in itself. C.S. Lewis says in Mere Christianity, "If I find in myself a desire which no experience in the world can satisfy, the most probable explanation is that I was made for another world."

My lovely sister, Eve, posted this video, saying, "This is how I envision heaven..." and I couldn't agree more! Finally with the One we love in the home we never had.