Feeling Shame Is Not Repentance by Petar Nenadov 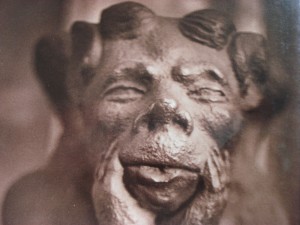 "What do you say to people who are dealing with shame from sexual sin?" a longtime friend asked me in a text message.

That question deserves more than a text response, but I wrote, "It could only be the strategy of Satan to allow the shame of one sin to lead you into more sin. And so I would go to Psalm 51—this psalm shows how to deal with shame from sexual sin. And the prayer for restored joy is a big key."

screwtapeThis question from my friend hints at the heart of many struggles in the Christian life—how we respond to the choices we make is just as important as the choices themselves. In popular media when someone is being tempted, it's common for an angel and a devil to appear, each trying to sway the person toward good or evil. Once a character makes a decision, the devil disappears.

In our everyday experience, however, the tempter never disappears. In fact, he does the most effective work after the supposed "crisis moment." C. S. Lewis offers insight on this work in The Screwtape Letters.

I see only one thing to do at the moment. Your patient has become humble; have you drawn his attention to the fact?. . . Catch him at the moment he is really poor in sprit and smuggle into his mind the gratifying reflection, "By jove! I am being humble," and almost immediately pride—pride at his own humility—will appear.

Hide your face from my sins, and blot out all my iniquities. Create in me a clean heart, O God, and renew a right spirit within me. Cast me not away from your presence, and take not your Holy Spirit from me. Restore to me the joy of your salvation, and uphold me with a willing spirit.

Here King David acknowledges a proper sense of shame over his sin when he asks God to hide his face from his sins. His sin is ugly and offensive to a holy God. Yet in his repentance, he not only seeks cleansing from sin, but also freedom from shame when he prays, "Restore to me the joy of your salvation."

Again, we learn from Lewis in The Screwtape Letters:

You will say these are very small sins; and doubtless, like all young tempters, you are anxious to be able to report spectacular wickedness. But do remember, the only thing that matters is the extent to which you separate the man from the Enemy. It does not matter how small the sins are, provided that their cumulative effect is to edge the man away from the Light and out into the Nothing. Murder is no better than cards if cards can do the trick. Indeed, the safest road to hell is the gradual one—the gentle slope, soft underfoot, without sudden turnings, without milestones, without signposts.

Shame has its place, but feeling shame over sin is not the same thing as repentance from sin. Shame can come from wounded pride as much as it can come from our love for God. And when we allow the shame of one sin to lead us into more sin, the tempter can focus on small sins and still yield big results.

Petar Nenadov is an elder and serves on the staff of Lakeside Christian Church in Akron, Ohio.