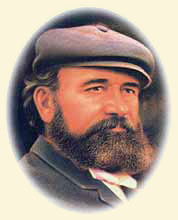 "Thy prayers are come up

What a beautiful expression the angel used to Cornelius, "Thy prayers are come up for a memorial."

It would almost seem as if supplications of years had accumulated before the Throne, and at last the answer broke in blessings on the head of Cornelius, even as the accumulated evaporation of months at last bursts in floods of rain upon the parched ground. So God is represented as treasuring the prayers of His saints in vials; they are described as sweet odors. They are placed like fragrant flowers in the chambers of the King. And kept in sweet remembrance before Him. And later they are represented as poured out upon the earth; and lo, there are voices and thunderings and great providential movements fulfilling God's purposes for His kingdom. We are called "the Lord's remembrancers," and are commanded to give Him no rest, day nor night, but crowd the heavens with our petitions and in due time the answer will come with its accumulated blessings.

No breath of true prayer is lost. The longer it waits, the larger it becomes.