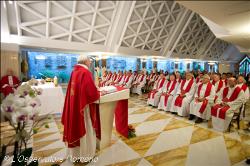 Pope Francis referred back to this passage from Thursday's Gospel in his homily, moving from Jesus' warning. He warned: "When we are on the street and find ourselves in front of a closed Church," he said, "we feel that something is strange." Sometimes, he said, "they give us reasons" as to why they are closed: They give "excuses, justifications, but the fact remains that the Church is closed and the people who pass by cannot enter." And, even worse, the Lord cannot be close to the people. Today, the Pope said, Jesus speaks to us about the "image of the [lock]"; it is "the image of those Christians who have the key in their hand, but take it away, without opening the door." Worse still, "they keep the door closed" and "don't allow anyone to enter." In so doing, they themselves do not enter. The "lack of Christian witness does this," he said, and "when this Christian is a priest, a bishop or a Pope it is worse." But, the Pope asks, how does it happen that a "Christian falls into this attitude" of keeping the key to the Church in his pocket, with the door closed?

"The faith passes, so to speak, through a distiller and becomes ideology. And ideology does not beckon [people]. In ideologies there is not Jesus: in his tenderness, his love, his meekness. And ideologies are rigid, always. Of every sign: rigid. And when a Christian becomes a disciple of the ideology, he has lost the faith: he is no longer a disciple of Jesus, he is a disciple of this attitude of thought... For this reason Jesus said to them: 'You have taken away the key of knowledge.' The knowledge of Jesus is transformed into an ideological and also moralistic knowledge, because these close the door with many requirements."

The Pope continued, Jesus told us: "You burden the shoulders of people [with] many things; only one is necessary." This, therefore, is the "spiritual, mental" thought process of one who wants to keep the key in his pocket and the door closed: "The faith becomes ideology and ideology frightens, ideology chases away the people, distances, distances the people and distances of the Church of the people. But it is a serious illness, this of ideological Christians. It is an illness, but it is not new, eh? Already the Apostle John, in his first Letter, spoke of this. Christians who lose the faith and prefer the ideologies. His attitude is: be rigid, moralistic, ethical, but without kindness. This can be the question, no? But why is it that a Christian can become like this? Just one thing: this Christian does not pray. And if there is no prayer, you always close the door."

"The key that opens the door to the faith," the Pope added, "is prayer." The Holy Father warned: "When a Christian does not pray, this happens. And his witness is an arrogant witness." He who does not pray is "arrogant, is proud, is sure of himself. He is not humble. He seeks his own advancement." Instead, he said, "when a Christian prays, he is not far from the faith; he speaks with Jesus." And, the Pope said, "I say to pray, I do not say to say prayers, because these teachers of the law said many prayers" in order to be seen. Jesus, instead, says: "when you pray, go into your room and pray to the Father in secret, heart to heart." The pope continued: "It is one thing to pray, and another thing to say prayers."

"These do not pray, abandoning the faith and transforming it into moralistic, casuistic ideology, without Jesus. And when a prophet or a good Christian reproaches them, they the same that they did with Jesus: 'When Jesus left, the scribes and Pharisees began to act with hostility toward him' – they are ideologically hostile – 'and to interrogate him about many things,' – they are insidious – 'for they were plotting to catch him at something he might say.' They are not transparent. Ah, poor things, they are people dishonoured by their pride. We ask the Lord for Grace, first: never to stop praying to never lose the faith; to remain humble, and so not to become closed, which closes the way to the Lord."

Text from page http://en.radiovaticana.va/news/2013/10/17/pope_francis_at_mass_calls_for_greater_openness_/in2-738150
of the Vatican Radio website