In Which You, Me and Pascal Drink Some Beers by Julie Moore 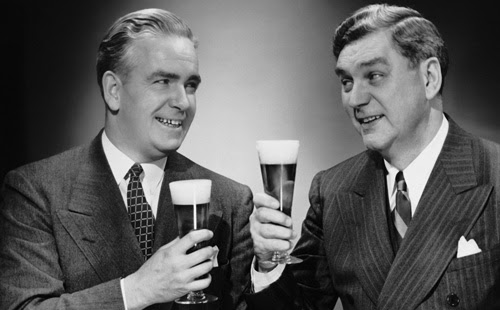 Let's imagine that this, along with my last two posts, is us at my house, staying up super late, having a long conversation over beers...

Of course it would be better if you were actually here to provide the other side of the conversation, and that can certainly be arranged... but until then, we'll just have to accept things as they are...

With our first brew, we pondered the mystery of why some people "get" Christianity, and I postulated that maybe you kinda hafta WANT to get it. But then we had another beer, talked some more, and I kept thinking of different examples of people who did NOT want to get it, but did. Because God's a wild card – sometimes He does that shocky paddle thing rescue workers on TV do on somebody's cold, stony, unwilling heart. Now let's finish off the six-pack...

So God can, and does, on occasion, grab people who don't want to be grabbed... BUT in general, it seems illogical to me for a person to go around saying, as Homer Simpson does, "Don't say Jesus!"... but then wonder why He's not talking to them. But people do this. I've done this. And this morning in the shower, I realized that I wish I had asked my dearly missed friend, "Why is it so important to you that Christianity not be true?"

And, well, it might not be right, but I have to wonder if it was because of her husband, who was a firm atheist. That is, maybe it was important to her that a belief system that condemned her husband NOT be true. And I have to say I totally get this.

It is a sticking point for many people, including me. Except... if the gospel is true, it's true whether I believe it or not. I mean, just because I don't want it to be true doesn't make it less true.

And this all sounds like I am convinced that everyone who doesn't believe as I do is going to hell.... but the truth is, I just don't know. Many Christians actually hold a universal view of salvation – that Jesus' death covered the sins of EVERYONE whether they believe or not.  And I LOVE this idea.... But the side of my mind that has been schooled in a BIBLE church thinks that Biblical support is stronger for salvation for those who believe.

There are so many places in the Bible where that support this.* Jesus himself says that the work of the Christian is to believe in Him**... Which, when it comes to WORK, seems kinda painless... When you compare it to the level of perfection required to actually save one's own soul. If that were even possible.

Thing is, though... what God is thinking and doing and planning ... We're just looking in the mirror dimly right now, as our buddy Paul has said. We only have a partial picture, and that picture includes the Bible's revelation of God sending His Son to save us. So why not get on board with what we DO know? (Haha - I'm typing this on my iPad which is super difficult, and I typed "boar" instead of board... then I got a brief mental picture of myself riding a wild boar with huge-ass tusks – just hanging on for dear life!)

For all I know God could have some kinda plan for everybody else, but, again, I have been given the privilege to hear about his love and saving grace through Jesus, so it behooves me to grab hold of it. Most of my knowledge of God when I first grabbed on was purely theoretical, and while it is purely theoretical, it is easy to weigh it in your mind, like - these things that are said about God are lovely, these these things that are said are puzzling, and these things just seem down right unfair...

But at that time, I was so desperate that the fairness or unfairness of God's grace was not even an issue. I just needed relief from my own self and soul sickness, and that's what He's selling, my friends. Not always immediately or even perceptively at first, but ultimately and eternally. (Was that redundant?) Or rather He's giving it away.

Once my knowledge of God broke out of the purely theoretical and into the experiential, well... I experienced a God who was so completely GOOD... And loving and merciful and kind and slow to anger and all the things the Bible says he is... That I have pretty much no choice but to trust Him with my soul and the souls of the world.

Have you heard of Pascal's wager? Well, French philosopher Pascal said people should live as though there is a God... because what we would lose if we don't and there is, is way more than what we would lose if we do and there isn't. And I have no intention of taking this risky bet with your soul. That's why I'm all up in your metaphorical face telling you about Jesus. I mean, sure God could be saving everybody willy-nilly, I would LOVE that... but that isn't the light that I have. I have to go with the revelation I've been given.

So... Maybe God has plans I don't know about and, again, I would LOVE that! But I don't know about them, so I'm going to make sure you have all the info you need to grab ahold of His salvation.
Dig this simplistic but handy illustration: Say the whole world has the plague. ("Bring out your dead! Bring out your dead!") Some people feel its effects and others don't. You don't, but someone tells you, "You have the plague, here's a remedy." Would you say, "No thanks.  I'm going to see whether I become symptomatic. Plus, I'm not taking that pill unless everybody in the world gets one. In fact, I'm not taking it unless everyone in the world gets well whether they take it or not!"

Well, maybe if you weren't feeling the effects of the plague, you could sit around and contemplate whether you're sick or not, and the fairness of everything... but if you were at death's door, you might grab that pill and gulp it down like a dying man... because you are. Dying. And then you could open up a clinic and a mail-order business and a website to help spread the remedy to other people throughout the world. Like on an airplane when they tell the adults to put on their gas mask first, then help the kids.
Maybe they can get well another way, but what if they can't? And maybe you could argue that no one actually HAS the plague. But what if they do? That's why I'm always nattering on about Jesus and all. I know it's super annoying, but ... what if people really need it?**
AND what if the pill has great side effects like... i don't know – love, joy, peace and the knowledge and Presence of the Everlasting God?*** Then even if they didn't NEED it, it would still be a great high... Can I get an AMEN?
Anyway, I guess I should stop talking now. I'm going to say this is the last installment of this diatribe... but why limit myself? We can certainly make a beer run.****