The Blood is the Life (Red Letter Edition!) by Julie Moore

Too many vampires to count! 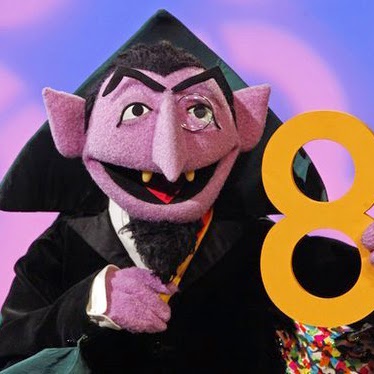 Okay, so I've confessed to a weird fascination with men in kilts, and that was embarrassing... so here's another one.

Vampires. Yep. Not actual vampires. I mean, IF those exist, I'm sure they're not something I want to know about... I'm talking about literary and screen vampires, of course... Dracula, Edward and Jasper Cullen, Damon and Stefan Salvatore, Angel and Spike, Bill Compton and Eric Northman, John Mitchell, Louis and LeStat...

...and Matthew Clairmont from Deborah Harkness's books. He is fine. And these books are sooooo good. I can't stop reading them. When the last one came out recently, I trekked over to Quail Ridge Books in Raleigh to meet Ms. H. She spins a fascinating tale – about a historian who studies ancient alchemical manuscripts... and just happens to be a witch. She meets the aforementioned vampire and sparks fly. Literally. From her fingertips.

I know – it sounds about as silly as a book about a modern woman who time-travels to Scotland during the 1745 Jacobite rebellion and falls in love with a hot kilted warrior, but as I said before, I'm all over that one too!

A few of my favorite
vamps: John Mitchell
(Being Human,) Jasper
Cullen (Twilight) and
Eric Northman – long-
hair version (True Blood)
Anyway, I've been trying to figure out why I love vampires in books so much and, well... I've not been able to come up with anything...?? Maybe because the ones in the books I read are invariably described as blindingly handsome... Yes, I'm that shallow. Plus, they have superpowers: super speed, super senses, super strength, super sex appeal... And who doesn't love a superhero? Who doesn't wish they had super powers?

And, like the kilted warriors in my beloved Highland fantasies, they are dangerous bad-boys... the ultimate bad-boys. Of course if there really were vampires, I've a feeling they would look more like or Count Orlok in Nosferatu or (at best) Marilyn Manson in full makeup, than Robert Pattinson or Alexander Skarsgard. And drinking blood... ew. But a good fiction writer can make these guys sound like the men of our dreams! A super hot man who thirsts for his lady like a vampire thirsts for blood. Except in this case they're one and the same. Who doesn't want to be desired so deeply?

But then there's the question of ... is it okay for a Christian to read this kind of thing? And my answer is... Yes. No. Maybe. I don't know.

I mean, the Bible says not to get involved in the occult. In I Samuel 28, King Saul gets in hella big trouble when he consults a medium. Well, I'm not doing anything like that. I have no interest in what a medium might have to say. I'm reading a story. A love story. A ripping yarn. I'm being entertained. And, honestly, when I read a good love scene it sends me straight to the marriage bed... which God loves. The marriage bed, I mean. He's into that. And so am I.

I wonder if this is one of those kind of things that people have to make up their own mind about – like eating food sacrificed to idols. (I Corinthians 8) Like... it's not a sin unless you think it is, because idols don't exist. It only has to do with whether it messes with your conscience. If it bothers you, don't do it. Of course that might just be my excuse... I don't know...

who created the sexy vampire
Matthew Clairmont! There's
no movie yet, but I picture
him as played by Clive Owen.
I mean, honestly, I have no problem distinguishing between reality and fantasy. Although maybe atheists would beg to differ...? I mean, what is a belief in God if it's not a belief in the supernatural? But so far, worshipping one supernatural Being hasn't proved itself a gateway drug to believing in all proposed supernatural beings, especially those conjured by human pens.

And truly, I'm not sure HOW I know the difference, I just know that in the actual true story of my life, my soul was dead, my body was nearly dead (undead?)... but now I'm alive. And this is NOT fiction, but my real life. A good writer can write mesmerizing stuff that entertains, but is it true? It may contain truths about love and life, but is it Truth with a capital T?

And to throw a weird wrench into the engine, I DO believe that Satan exists, as our friends the Louvin Brothers taught us. So last night when Tom and I watched an episode of Penny Dreadful where a lady surrenders to the devil, I was a completely creeped out. Why do I believe in one thing and not the other? I guess my measuring device is the Bible... which... some people might think was also conjured by human pens.

I guess we could sit around and jaw all day about whether or not the Scriptures are inspired by God and if the Bible or God are not your thing, I'm probably not going to convince you of anything because, well, in my experience, you have to say yes to it BEFORE it makes complete sense and sounds like truth. I guess that's faith...

I'm thinking if there
WERE real vampires
they might look more like
Count Orlok from
Nosferatu or Marilyn
Manson in full makeup.
Anyway, let's say the Bible is my plumb line. Is Satan mentioned in the Bible? Yes. Are witches in the Bible? Actually, yes, but they're not exactly the kind that you read about in your average paranormal romance. Moving right along... Are vampires in the Bible? No.

Although... In the Old Testament, the Israelites are specifically prohibited from drinking the blood of the animals they killed, "for the blood is the life." Maybe to reinforce that God Himself was the source of their life? Or to set them apart from the pagans around them whose religious rites involved drinking blood? Whatever the reason, they were told more than once that blood was NOT a suitable beverage for God's children.

That's why the top dogs at the Temple were so freaked out when Jesus said THIS: "Very truly I tell you, unless you eat the flesh of the Son of Man and drink his blood, you have no life in you. Whoever eats my flesh and drinks my blood has eternal life, and I will raise them up at the last day. For my flesh is real food and my blood is real drink. Whoever eats my flesh and drinks my blood remains in me, and I in them." (John 6)

The Louvins cautioned us not to 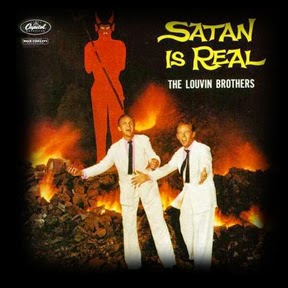 discount the existence of Satan.
Yeah, the Pharisees freak, but it actually seems to me as if they were more puzzled by the logistics of it ("Then the Jews began to argue sharply among themselves, 'How can this man give us his flesh to eat?' ") than concerned with violating the law – although I'm sure this came into it as well. I find it odd that those guys couldn't seem to get a grasp of the symbolic – especially when their whole religion was chock full of metaphors – what with the temple and the sacrifices and all. Or maybe they didn't like Jesus telling them (in so many words), "Everything you've been doing is just a metaphor for what's happening NOW." Maybe they thought THEY had the whole of the real thing...?

But I digress... anyway, Jesus established this "blood drinking" ritual for all time with the institution of Holy Communion at that last supper he had with his friends. "Then he took a cup, and when he had given thanks, he gave it to them, saying, "Drink from it, all of you. This is my blood of the covenant, which is poured out for many for the forgiveness of sins." (Matthew 26:27-28) 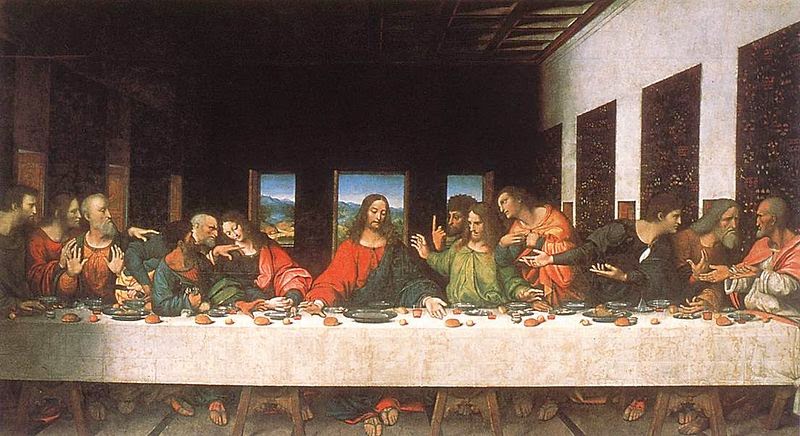 A famous portrayal of the event where Jesus told
his peeps to (symbolically) "drink His blood."

That's right. Drink His blood. Because the life is in the blood. So... I started out talking about vampires... which I don't believe in... and wandered over into a religious ritual involving the symbolic ingestion of blood... which I do believe in... which sort of pushes the question out again – how do I know the difference between what is and is not real...?

It has to do with experience: Again - my soul was dead, my body was nearly dead... but now I'm alive... Heck, I have superpowers! I am strong even when I'm weak, wise even when I'm foolish... I can love with a preternatural love, influence events with prayers, and do all things through Christ who strengthens me. And immortality? Yep. 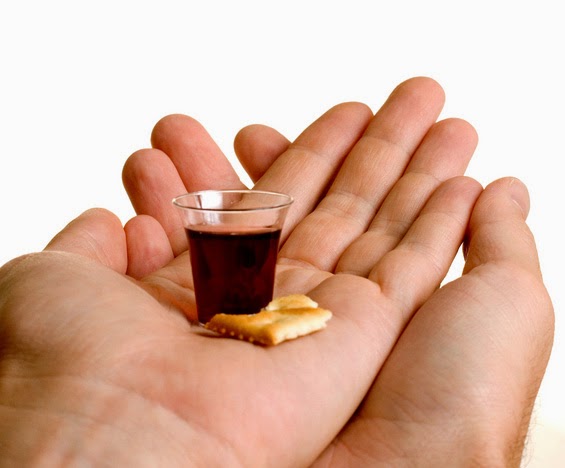 And we still do it, after a fashion.
It also has to do with faith: To understand these things (as if anyone could) you have to first grab hold of them. Knowing comes AFTER: "When you have lifted up the Son of Man, THEN you will know that I am he..." is what Jesus says in John 8... followed by this: "If you hold to my teaching, you are really my disciples. THEN you will know the truth, and the truth will set you free." (emphasis mine)

And if you find yourself unable or unwilling to reach out for God, tell Him so. That's what I did. I actually told Him to leave me alone! And we see how THAT turned out...!