I joined the Grave Dancers Union by Julie Moore

I joined the Grave Dancers Union

Well... I've been a bit busy, as you may have guessed from the long stretches between posts... But my enthusiasm for this series (waxing spiritual over Soul Asylum's Grave Dancer's Union album one song at a time) has not waned, though yours might have! Not to worry, though - only four songs left! Anyway, here's our next song (click on the title to hear the track):

This song proved to be a special challenge to me... Its meaning isn't really clear... to me, anyway... It's maybe about a guy who does dumb, embarrassing things that make him want to disappear... which I totally identify with... and then I realized that the guy in the first verse – the one who fell in love with a hooker – could be the prophet Hosea... who, famously, married a prostitute. BUT the thing is... GOD told him to do it! (When the Lord began to speak through Hosea, the Lord said to him, "Go, marry a promiscuous woman and have children with her, for like an adulterous wife this land is guilty of unfaithfulness to the Lord." Hosea 2:2) 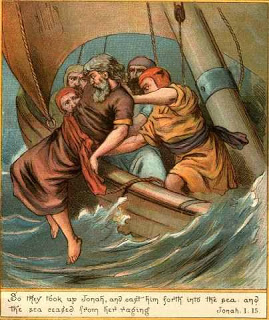 And then I thought... Sometimes God requires things of us that don't make sense (like standing in the sun with a popsicle?) and might even embarrass us. Yes, I admit that even though I love God and, like Paul, am not ashamed of the gospel... I am not spiritually advanced enough to NOT feel embarrassed sometimes. And yes, sometimes I want to run away... like the prophet Jonah did when God told him to go preach hellfire and damnation to the baby-eating Ninevites. First, Jonah probably thought they would kill him. Second, he really didn't want them to repent and be saved... so what did he do? He got on a boat and sailed the opposite way. He left "without a trace."

I wrote in this blog entry about times I felt like God was actually telling me specific things, and you might think that's several shades of crazy, but the fact remains, it was very real to me. And some of those times, the thing God was asking of me were NOT easy... and I DID want to flee... to disappear without a trace. Like when He "told" me – a fearful former anorexic – to stop exercising for a while. Or that time He prodded me relentlessly in the middle of a weekend road trip to break up with the super nice guy I was with RIGHT AWAY... nearly 300 miles from home.

Conversely, doing normal expected things like getting a good job with honest pay (second verse) – while not WRONG, per se – can be pointless if God is asking you to do something else. You might as well join the mob, right? For instance, sailing to Tarshish wasn't a wrong in itself, but God had asked Jonah to go to Ninevah... which landed him right in whale's gut. As Jonah found out, God has His ways of getting His way. IF we decide to listen to Him. And believe me, I have tried at times to shut Him out. Not a good idea. I may not have ended up in the belly of a whale, but it's never a good scene.

Anyway, as for the last verse... dancing at a funeral "New Orleans style" may not make sense to people either... it only makes sense if you actually believe that death not the end... that there's something better ahead for that person's soul... As Christians, we have joined the union of folks who choose to set our eyes on heaven – union with God forever. And that might sound like a load of hooey to some people.

I guess the point is, God sometimes calls us to step out of the ordinary and do things that might make people point and laugh at us. And while there are general rules like that Ten Commandments and the general laws of love and grace, there's really no rule about these kinds of things (the right thing changes from state to state)... God just sometimes has His own ideas about what you should do, and you probably should just go with it.
"For my thoughts are not your thoughts, neither are your ways my ways,"
declares the Lord.
"As the heavens are higher than the earth, so are my ways higher than your ways and my thoughts than your thoughts.(Isaiah 55:8-9)

And in my experience, if God is in it, it's going to turn out much better than you ever imagined...*

*"Now to him who is able to do immeasurably more than all we ask or imagine, according to his power that is at work within us, to him be glory in the church and in Christ Jesus throughout all generations, for ever and ever! Amen." (Ephesians 3:21)