Left Behind in America-Russell Moore 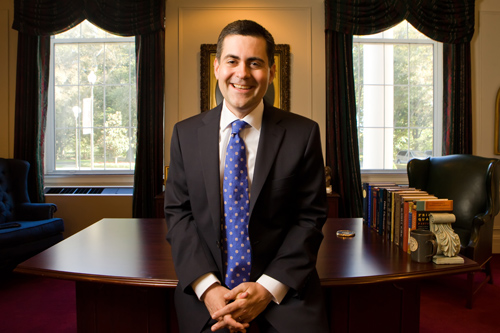 As a child growing up in a Southern Baptist church, I learned my place in American culture through rapture movies.

These films—based on a pop-dispensationalist reading of prophecy—pictured a time when the church would be suddenly ripped from the earth, sailing through the air to be with the invisible (to the viewer) Jesus Christ. These films would always then picture the panic of those who were "left behind" and depict the societal chaos that would emerge once the "salt and light" of the culture had disappeared. We never considered that if such a rapture were to happen, American culture might be relieved to be rid of us.

Historian Rick Perlstein notes the "culture wars" that ignited in the 1960s and 1970s were really about dueling secular prophecy charts. "What one side saw as liberation, the other side saw as apocalypse," and vice-versa, he writes. It's hard to argue with his thesis. The scenes of LSD-intoxicated college students frolicking nude in the mud of the Woodstock Festival in New York would seem horrifying to the salt-of-the-earth folk in Middle America for whom "the dawning of the Age of Aquarius" would seem like a threat. At the same time, Merle Haggard's counter-revolutionary anthem would have the same effect, in reverse. The words, "We don't smoke marijuana in Muskogee," must seem like hell, if you're in Woodstock.

From Majority to Minority

The problem with American Christianity is that we always assumed there were more of "us" than there were of "them." And we were sometimes confused about who we meant when we said "us."

The idea of the church as part of a "moral majority" was not started, or ended, by the political movement by that name. The idea was that most Americans shared common goals with Christianity, at least at the level of morality. This perception was helped along by the fact that it was, at least in some ways, true. Most Americans did identify with Christianity, and the goods of Christianity such as churchgoing and moral self-restraint were approved of by the culture as means toward molding good citizens, the kind who could withstand the ravages of the frontier or the challenges of global Communism. Mainstream American culture did aspire to at least the ideal of many of the things the Christian church talked about: healthy marriages, stable families, and strong communities bound together by prayer.

'God and Country' or 'Christ and Him Crucified'?

Politically and socially speaking, this is what a group is supposed to do: to attach itself to a broad coalition and to speak as part of a majority. The problem was that, from the beginning, Christian values were always more popular than the Christian gospel in American culture. That's why one could speak with great acclaim, in almost any era of the nation's history, of "God and country," but then create cultural distance as soon as one mentioned "Christ and him crucified." God was always welcome in American culture as the deity charged with blessing America. But the God who must be approached through the mediation of the blood of Christ was much more difficult to set to patriotic music or to "amen" in a prayer at the Rotary Club.

Now, however, it is increasingly clear that American culture doesn't just reject the particularities of orthodox, evangelical Christianity but also rejects key aspects of "traditional values." This is seen politically in the way that the "wedge issues" of the "culture wars," which once benefited social conservatives, now benefit moral libertarians—from questions of sexuality to drug laws to public expressions of religion to the definition of the family. Turns out, they do smoke marijuana in Muskogee.

This leaves American Christianity pondering the path forward. The alternative many will find is a sort of siege mentality. Some will retain the illusion of a previously Christian America and grow all the angrier, thinking that we have lost something that rightly belonged to us. And others will wish to simply absorb into the larger culture in their secular lives, while carving out countercultures in their churches to hold fast to the gospel. I would argue though that the cultural tumult around us is no cause for either clenching fists or wringing hands.

We ought to see the ongoing cultural shake-up in America as a liberation of sorts from a captivity we never even knew we were in. The closeness of American culture with the church caused many sectors of the American church to read the Bible as though the Bible were pointing us to America itself. That's why endless recitations of 2 Chronicles 7:14 all focused on revival in the nation as a means to national blessing, without ever asking who the "my people" of this text actually are and what it means, in light of the gospel, to be "blessed."

And that's why in the most culturally conservative parts of the country, Christianity often became a rite of passage to a place in the community, often without the self-crucifying power of regeneration. To be a good American in the Bible Belt meant one was born to be born again. In this context, the gospel seemed far less strange than it did to both the religious Jewish and pagan Greek contexts of the New Testament witness. We may now be forced, at last, to understand who "we" are, and to see that we can be Americans best if we are not Americans first.

The church now has the opportunity to bear witness in a culture that often does not even pretend to share our "values." That is not a tragedy, since we were never given a mission to promote "values" in the first place, but to speak instead of sin and of righteousness and of judgment, of Christ and his kingdom. We will now have to articulate concepts we previously assumed—concepts such as "marriage" and "family" and "faith" and "religion." So much the better, since Jesus and the apostles did the same thing, defining these categories in terms of creation and of the gospel. We should have been doing this all along. Now we will be forced to, simply to be understood at all.

We Are Not Losers

Above all, we should approach American culture without panic or anger. This will be difficult. We will see things happening that we do, and should, lament, things that were kept from happening by the veneer of American civil religion. Moreover, there will always be those who will set up a kind of protection racket, judging the intensity of Christian conviction on the basis of the theatrical force of expressed outrage. Such responses, though, are the tactics of losers. And we are not losers.

Our end goal is not a Christian America of the made-up past or the hoped-for future. Our end goal is the kingdom of Christ, made up of every tribe, tongue, nation, and language. We are, in Christ, the heirs of this kingdom. The worst thing that can happen to us is not cultural marginalization or social setbacks. The worst thing that can happen to us is crucifixion under the curse of God, and we've already been there. The best thing that can happen to us has already happened, too. We are raised with Christ, and seated with him at the right hand of God. That should free us to stand and to speak, not because we are a majority, moral or otherwise, but because we are an embassy of the future, addressing consciences made to long for good news.

The shifts in American culture have made those rapture movies turn out to be prophetic, in more ways than one. A rapture indeed is happening, but those who are evaporating in front of us are those structures of nominal, cultural Christianity. Good riddance. We will march onward as those with a gospel to preach and a kingdom to serve. We may be maligned, and we may be misunderstood, but we have not been left behind.

Editors' note: This article was originally published at 9Marks. Register to see Russell Moore address this topic of "From Moral Majority to Prophetic Minority: The Gospel and Cultural Engagement" in a workshop at our 2015 National Conference, April 13 to 15, in Orlando.

Russell D. Moore is the president of the Ethics and Religious Liberty Commission of the Southern Baptist Convention. He blogs at Moore to the Point and you can follow him on Twitter.