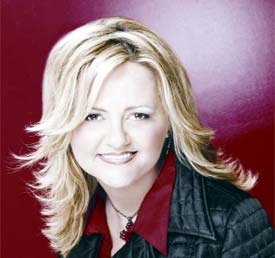 Something's in the air. I had not heard of the outrageously talented Vicki Yohe until I'd tuned into WBLS this morning, a station I've followed for years, no matter where I'm living. But I was never as much of a fan of BLS as of 98.7 Kiss FM, which had superior dance music that ranged from Shirley Ellis to Whitney to Beyoncé, and more than lived up to its claim that it broadcast "Classic Soul and Today's R. & B."

In any case, last weekend was my last chance to float on the Kiss airwaves before they merged with BLS, due to a recent programming deal between Emmis Communications and ESPN New York. Times are hard. I will follow the Kiss crew anywhere, even to the revamped BLS. We'll be old friends soon, and now I'm glad that I tuned in, because that's where I heard Vicki Yohe, and what might be described as her post-white voice. The song: "I'm At Peace." And the minute I heard it, I knew I was in the presence of something powerful-faith married to a gorgeous set of pipes that was steeped in the locutions of the black church as reinterpreted by a blonde white woman who's adopted a biracial child. 'Nuff said?

The song is as powerful as "Precious Memories," Aretha and James Cleveland's duet on the former's 1972 album, "Amazing Grace," a record that works because it includes talents other than Aretha's own-she has to step up instead of coasting on her "legendary" status. (Franklin's joining forces with Clive Davis weeks after Whitney's death says as much about her ambition as it does about the brutality of the music business.) But Yohe has a faith that's bigger than show business, and, as the somewhat literal-minded video for her song indicates, she has an interest in becoming the voice of working-class America, a world where blacks and whites who feel stiffed by a dream they can't remember having, exist side by side, separated less by race than from those who have, because they do not have much.