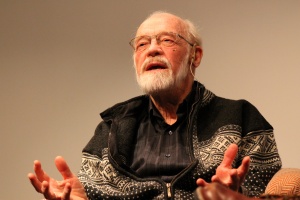 Eugene Peterson has written more than 30 books on theology and the life of faith in his 80 years, but he is perhaps best known for the one book he didn't write: The Bible.

Peterson's "para-translation" of the Bible, The Message: The Bible in Contemporary Language, was published over a span of nine years, from 1993 to 2002. And even a decade after its completion, critics still are debating the merits and missteps of his translation of Holy Writ into idiomatic, sometimes colloquial, modern English.  To date there are more than 15 million copies of The Message in print.

During the two-day Q Practices gathering in New York City this week, Peterson talked about the epic translation project he says he still can't believe he actually managed to complete.

"I didn't feel it was anything special when I was doing it," Peterson said. "I can't believe I did this. Reading it now I think, 'How did I do this?' It truly was a work of the Holy Spirit."

As for The Message's perennial critics and their allegations that his translation contains inaccuracies and poetic license that amounts to sacrilege, the man who, despite his prolific literary oeuvre, insists he is "a pastor, not a writer," seems entirely unfazed.

"Most of the criticism comes from people who don't understand language," Peterson said. "I have to explain to them what a metaphor is... But I tray to be courteous and gentle and try to explain what I did."

A lot of us suffer from an underdeveloped imagination. "We have to train our imagination to be narrative," he said. "Too many of us are illiterate of the Bible. We haven't embraced it as story.

"I grew up in a culture where everything in the Bible was literal. Then I discovered metaphor. Words don't always mean what they say.... I had to enter the world of the words in order to understand what was being said," he explained. "If we understand how language works, it cannot be translated literally. It can be accurate, but it not literal."

As he often does, by way of explaining further, Peterson said, "Let me tell you a story."

While visiting with his children and grandchildren one day, his son reprimanded his grandson for running in the house. His grandson narrowed his stride by a few inches and said, "I'm not running, I'm jogging."

"It was literal," Peterson said, chuckling, "but it wasn't true."

When Peterson was 12 years old - a bit older than his cheekily literal grandson was at the time of the running/jogging semantics standoff - he bought his first Bible: a Moroccan leather-bound Scofield edition of the King James Version.

"That was my Bible for a long time," he said. One summer during his middle-school years, his family moved to a new neighborhood. Friendless, he passed the summer months lying on the living room couch reading his new Bible. While he spent hours reading scripture, "I wasn't getting it," he said. The language wasn't familiar to him. Something had been lost in translation.

"And then I discovered metaphor," he said. Most of the biblical writers were fluent in the language of metaphor and used it liberally. Jesus himself told parables - a word taken from the Greek that describes something that is thrown down on the ground. "You see it and think, 'What's that doing there?'" he said.

The Bible is a living, breathing text, the Word of God. Alive. Interactive. And contemporary.

"The New Testament was written in everyday street language," Peterson said. "Words make something. They don't just say something. ... You are free not to study the Bible but to enter into it, to let it become part of you, - not deciding what you need, but receiving what's there."

Here's an example of how Peterson translated scripture. Below is a passage from Psalm 96:4-7, first in the King James Version and then in The Message.

For God is great, and worth a thousand Hallelujahs.
His terrible beauty makes the gods look cheap;
Pagan gods are mere tatters and rags.
God made the heavens-
Royal splendor radiates from him,
A powerful beauty sets him apart.
Bravo, God, Bravo!
Everyone join in the great shout: Encore!
In awe before the beauty, in awe before the might.

Many of the biblical writers retold and reimagined stories that had been told in scripture before. In other words, they paraphrased and translated them for the context in which they were being shared.

And then there's St. Paul.

"I love translating Paul," Peterson said. "He has these wild metaphors and his syntax gest all tangled up sometimes. ... He's a very poetic writer."

Paul knew the stories of the Hebrew scripture. Like all of his contemporaries, he had learned them orally from the rabbis and in community. He was the first real "writer" of scripture, retelling and reimagining the stories for an audience - the early Christians - who also knew the stories from their oral tradition.

Later, the Gospel writers retold some of the same stories in different language and with different imagery, as they were writing for a mixed audience of Jews and Gentiles, some of whom were hearing the stories for the first time.

In translating the Bible into contemporary, colloquial English for The Message, Peterson was following an ancient and wholly biblical tradition. He left out the verse numbers and footnotes in his translation because he felt they make the Bible feel like a reference book rather than a dynamic, living story.

"Don't treat the Bible as a thing to be dissected," he said. "It's not a thing. It's the living Word of God."

So, which version or translation of the Bible does Peterson read himself?

The Revised Standard Version, which is the version he used during his studies in seminary more than 50 years go. Peterson often reads the Bible aloud, he said, "savoring the sounds and images, the poetry, the rhythms." And he spends most of his Bible studies reading the text in its original Greek and Hebrew. (He was a professor of biblical languages for many years.)

But then, from time to time, he'll pick up The Message, too. ""I'll read something in it and think, 'Thank you, Lord. That's really good.'"

Peterson's passion and love of the Bible is palpable when he talks about it. It's not an academic or intellectual pursuit for him. It's a romance. A love story between God and Eugene, between God and all of us. And we are part of the ongoing narrative that the scriptures tell.

Early on in our discussions of the Bible at the Q Practices gathering, Peterson made a passing comment that piqued my imagination. He said: "When I read the Bible for the first time, I realized the Holy Spirit left out most of the good parts."

During a question-and-answer period, I asked him which parts the Holy Spirit had, in fact, left out. He laughed and then launched into another story.

I could never do it justice here in writing, so click the button below and listen to Peterson tell it in his own words.