Thank you very much!! (a very late Christmas blog) by Julie Moore

In an effort to justify leaving up our Christmas decorations
slightly past Epiphany, my husband informed me (and Wikipedia confirms) that the Julian calendar places the last day of Christmas on January 17th. Today. Apparently in some places, particularly south-western England, celebrate this as "Old Twelfth Night." And now I'm using this piece of arcane info to justify posting this, my traditional Christmas blog, on this, the alternative last day of Christmas. So here goes...
The Moores' holidays are generally jam-packed with activities and candy and errands and more candy and visits and shopping and some extra candy… well, you know – general holiday stuff. And all the while Tom is storing up holiday programs on the TIVO that we don’t have time to sit down and watch – particularly because we’re hooked on the British soap opera Eastenders. It comes on four times a week, and we have to watch them on YouTube as soon as possible – before the BBC yanks them down...
Anyway this is all to say that Tom and I just now watched a movie called Scrooge – a musical adaptation of Charles Dickens’A Christmas Carol starring Albert Finney (with Obi Wan Kenobi making a spooky appearance as Jacob Marley!) Intrigued? If you’ve got a couple hours you can watch the whole thing here:https://www.youtube.com/watch?v=SHfaRVf5cUY
Of course most everyone knows the general plot and intention of this Christmas classic, so I won’t bother giving you a blow-by-blow account of it. I’m just going to start right in on the latter part of the film where Scrooge has been ushered in his nightgown to a scene in the middle of town where all manner of folk are singing a rousing show tune that goes like this: “Thank you very much, thank you very much, it’s the nicest thing that anyone’s ever done for me!”
And it would seem that the very one they are thanking at this undisclosed future time, is Scrooge himself! Invisible nightgown Scrooge accepts their gratitude with uncharacteristic humility, never realizing that they’re singing and dancing around his coffin! See, these are all the people who owe Scrooge money, and his death cancels their debts! They’re literally doing the old soft shoe on his coffin! (If you drag the slider to about 1hr/20sec on the video link above, you can see this rollicking number.)
So, again, if you’ve been awake during any given holiday season, you know that Scrooge does a 180 on Christmas and life in general… In this version he buys out a toy store and puts on a Father Christmas get-up and shows up at poor, shocked Bob Cratchet’s humble abode to shower his tribe with turkey and gifts and promises of financial aid.
This version then shows New Scrooge cancelling all the debts that are owed to his biz Scrooge and Marley, Inc. – ripping pages out of his ledger book and letting them flutter to the ground! And you better believe those down-and-out Londoners (probably Eastenders, if I may hazard a guess) are out of their minds with joy…. dancing around like crazy, reprising the Thank You Very Much song…
Now, those Londoners – some of them probably owe Scrooge because they made bad choices, but most of them were probably just stuck in the stupid system that was Victorian England – treading the wheel going nowhere. But either way… those debts just wafted to the muddy London paving stones.
Anyway, at this point I realized:
This is what Christmas is all about!!! The cancellation of debts!!! Colossians 2 says this:

And you, who were dead in your trespasses and the uncircumcision of your flesh, God made alive together with him, having forgiven us all our trespasses, 14 by canceling the record of debt that stood against us with its legal demands. This he set aside, nailing it to the cross.

The more casual Good News translation puts it this way:

When you were stuck in your old sin-dead life, you were incapable of responding to God. God brought you alive—right along with Christ! Think of it! All sins forgiven, the slate wiped clean, that old arrest warrant canceled and nailed to Christ’s cross.

And sure, this is about the cross and Easter and all, but would there be any Easter without a Christmas? 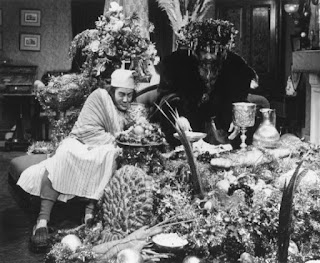 To explain: right now in my daily journey through the Bible, I’m trudging through Jeremiah... I say "trudge" because Jeremiah tends to go on all gloom and doom  and “God’s gonna judge you guys harsh”… So that was where my brain was at when I was thinking about all this. Of course, Jeremiah also laid out the mercy that would eventually follow, but I hadn’t gotten to that part yet - you know the incredibly beautiful passage in chapter 29… And because of stuff in the Bible like this, it’s not uncommon for people tend to see just the harsh judgey-judge aspect of God... So what I thought was that…
Pre-ghost Scrooge was (our view of) Old Testament (ie. pre-Jesus) God – all judgey and begrudgey. And post-ghost Scrooge was all – “I’m gonna absorb all your debts!” And because of Christmas, this is how we can start to see God – the one who loved us so much He sent this little baby – HIS OWN SON!! – into the world so that he could grow up to be the Man who would die for OUR utter crappiness. Wow! and, Yay!!
This truly IS the nicest thing anyone’s every done for me! So this is where I dance up the wall and climb up on something high and sing with the relieved Londoners... “Thank You Very Much!”