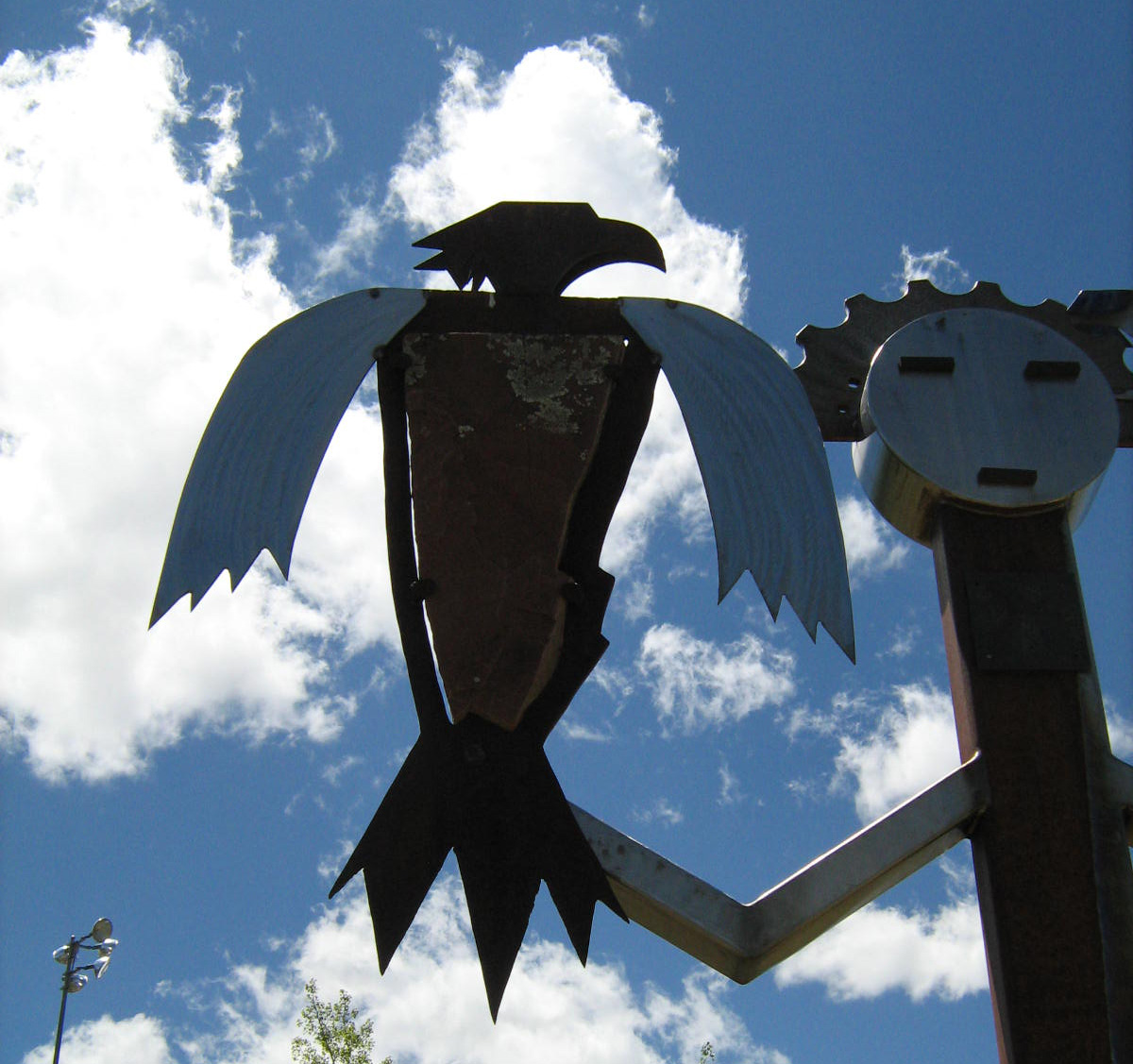 How do birds soar?

Not by their own effort, but by relying on the the force of winds–thermals, or currents of air created by the heating of the earth. In a similar fashion, to soar in our life as Christians, we must do as Moses does in Exodus 17, and rely on God’s direction to lift us through crises, to help us avoid creating crises, and to live our lives in glory to God. By himself, Moses cannot do what God asked him to do. How willing are we to recognize when we cannot do what God asks us to do, and ask others to support us? How willing are we to be the Aaron & Hur–supporters of Moses–rather than the star of the show? How willing are we to be someone who needs help? What does it say about God, that he puts Moses in a position to do something he cannot? How is this different from the Moses who argued with God about being able to speak to Pharoah, to do what God asked him–now he is willing to forge ahead, trusting in the almighty. The following scriptures highlight how we can only soar in life by surrendering to God, and as Moses did, rely on the community of believers to help us in whatever God places in our path.

“My way is hidden from the Lord,

And the justice due me [z]escapes the notice of my God”?

The Everlasting God, the Lord, the Creator of the ends of the earth

Does not become weary or tired.

His understanding is inscrutable.

29 He gives strength to the weary,

And to him who lacks might He increases power.

30 Though youths grow weary and tired,

31 Yet those who ]wait for the Lord

They will run and not get tired,

They will walk and not become weary.

Through soaring, birds gain altitude and travel quickly by taking energy from wind currents in the atmosphere. When they glide, they use the position of their wings to deflect air downward, which creates a force called "updraft" that keeps them up in the air. There are different kinds of soaring and gliding, and birds use them in a variety of ways.

Research published recently showed that the Andean Condor—the heaviest soaring bird, at 35 pounds—flaps less during flight than any other free-ranging bird. After following eight Andean Condors for five years, a team of European and Latin American scientists found that even young birds soar about 99 percent of their flight time. “They are the extreme version of a soaring bird. It was fascinating to us,” says Emily Shepard, the lead author of the study.

The researchers found that these giant birds flap only during take-off and landing. They are so massive that they lose altitude even when flapping as fast as they can. This means that their reliance on wind currents is nearly absolute, says Shepard. So, to stay in the air, Andean Condors mostly use thermals to elevate. Once they’re high enough, they can glide between thermals looking for food. Less frequently they use another type of air current called “orographic updraft” that forms when the wind collides with an object—like a mountain or a building—and changes its direction to go upwards.

For many birds on this list, soaring is a largely passive activity. They travel in a general direction, guided largely by wind currents, and keep their eyes open for food to scavenge or prey that's relatively easy to catch. Golden Eagles, though, engage in more complex activities while soaring. They hunt small and medium-size mammals. They stake out and defend territories of around 6,000 acres. They even play fetch with themselves. That complexity in behavior sets them apart from other large soaring species like vultures and condors, says Todd Katzner. “Golden Eagles, and other big eagles, are kind of unique because not only do they soar, but they soar to do all this crazy stuff,” he says. They don’t do very much flapping at all: It only takes up between 3 and 15 percent of their flight time.

Turkey Vultures are different from other vultures throughout the world. Most vulture species rely heavily on soaring and gliding through the air at very high altitudes (up to 37,000 feet), says Katzner, and they rely heavily on sharp vision to see the carcasses of dead animals from such a height. But Turkey Vultures have adapted to fly at lower altitudes to sniff the best pieces of carrion. In fact, they have one of the best smelling systems of all birds. In 2017, after comparing them with other 32 species, a team of researchers proved that Turkey Vultures has more mitral cells, which transmit information about odors to the brain, than any of the other measured species.

These birds fly using a type of soaring called “contorted soaring.” Through this technique, Turkey Vultures ride the upward wind generated when air currents collide with treetops. This allows them to stay closer to the ground compared to other carrion eaters, like Black Vultures in North America, giving them an advantage. They can also rock side-to-side while flying to counteract the wind forces in turbulent scenarios, which allows them to have a lot of control and stability in their flight. “They can fly with almost no wind and in very turbulent settings," Katzner says. "They are just one of the coolest species in North American to me."

Thermal: A relatively small-scale, rising air current produced when the Earth's surface is heated. Thermals are a common source of low level turbulence for aircraft. Air currents are caused by the sun's uneven heating of Earth. As sunlight beams down on Earth, it warms some areas, particularly the tropics, more than others. As Earth's surface is heated, it warms the air just above it. The warmed air expands and becomes lighter than the surrounding air.

(Webster’s dictionary) Soar: 1a: to fly aloft or about

b(1): to sail or hover in the air often at a great height : GLIDE

(2)of a glider : to fly without engine power and without loss of altitude

2: to rise or increase dramatically (as in position, value, or price) stocks soared

3: to ascend to a higher or more exalted level makes my spirits soar

4: to rise to majestic stature