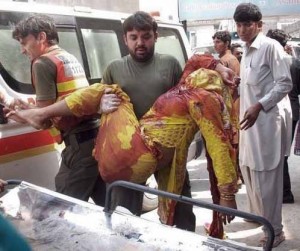 Another 145 people were injured in the blasts, authorities said, and Khan said 34 of those were children.

S.P. Asghar, arch deacon at All Saints Church, told Morning Star News by phone that around 300 members of the congregation were having lunch in the church compound when suicide bombers wearing police uniforms struck.

Nearly 60 percent of the congregation had left the church premises after worship ended at 11 a.m., he said.

"Around 11:15 a.m., the two bombers sneaked into the compound and blew themselves up," Asghar said. "I cannot explain the situation here in words ... Our compound is full of bodies and injured people, and ambulances are making rounds to take them to the hospital." 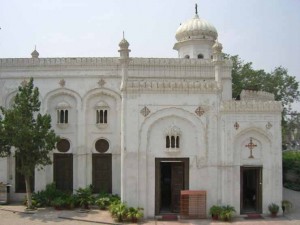 The blasts shook the entire neighborhood, shattering glass in nearby buildings, he said.

Asghar said the church administration had not received any specific terror threat by the security agencies.

"Security in churches is always tight during Sunday mass," he said. "There were about 14-15 police guards headed by an assistant sub-inspector of Peshawar Police assigned for our security, but still the suicide attackers managed their way in disguised as policemen."

"It's very difficult to identify and then stop a suicide bomber," Babakhel said.

"Thousands of innocent Pakistanis have fallen victim to suicide bombings ... It's unfortunate that no matter how hard we try, terrorists somehow manage to get away with their evil plans."

Police will investigate how the bombers managed to breach the security cordon, he added.

Azeem Ghauri, a Christian lawmaker of the ruling Pakistan Tehreek-e-Insaf, told Morning Star News that the All Saints Church had one of the biggest congregations in the province.

"There are more than 200,000 Christians in Khyber Pakhtunkhwa province, of which 70,000 are settled in Peshawar," he said. "Although the entire province is hit by militancy, Christians here have not been targeted like this before. I believe that the attack on Christians is an effort to sabotage the peace efforts initiated by the provincial government."

Peshawar Bishop Humphrey Peter condemned the suicide attacks targeted on the Christian community in Peshawar, saying the provincial and federal governments should find those responsible and administer exemplary punishment.

"There have been attacks on minorities' places of worship before, but this is the deadliest attack on Christians so far," he said. "We not only demand protection for Christians but security for each and every member of the Pakistani society."

Local television channels showed grieving relatives blocking the main Grand Trunk Road highway with bodies of the victims to protest the killings.
Sectarian violence between majority Sunni and minority Shia Muslims is a routine in Pakistan, and Sunday's attack will likely fuel fears the already beleaguered Christian community could be increasingly targeted. Islamist militants have carried out hundreds of bombings targeting security forces and minority Muslim groups they regard as heretical, but attacks on Christians have previously largely been confined to grenade attacks and occasional riots.
The attack on All Saints Church was condemned across Pakistan.

"Terrorists have no religion, and targeting innocent people is against the teachings of Islam and all religions," Prime Minister Nawaz Sharif said in a statement. He added that such "cruel acts of terrorism reflect the brutality and inhumane mindset of the terrorists."

Social media was abuzz with condemnations from Christians and moderate Muslims, who said attacks on minorities and growing intolerance had brought Pakistan to the brink of collapse.

"Highly deplorable and condemnable act of terrorism on a church in Peshawar killing over 50 innocent men, women and children," Muslim journalist Shehryar Rizwan stated on Facebook. "Heart and prayers go out to all victim families. Standing with all Christian brothers and sisters in this time of distress. Head hangs in shame. Shows how much intolerance and religious extremism prevails. Not even worship places are safe and they can't even tolerate peaceful citizens praying."

The U.S. Commission on International Religious Freedom has warned that the risk to Pakistan's minorities has reached crisis levels. Pakistan is nearly 96 percent Muslim, according to Operation World, with Christians making up 2.45 percent of the population.
Nairobi Attack

At the Westgate Mall in Nairobi, Kenya, gunmen from the Somali-based, Islamic extremist rebel Al Shabaab were said to have put up a poster in Arabic warning non-Muslims to leave, besides verbally ordering all non-Muslims out during the assault on Saturday (Sept. 21), according to local media.

"Attackers ordered all Muslims to get out the mall before the attack was carried out," said Ken Mijungu, a reporter for Nation Television Kenya. Citing witnesses, he said, "As they were shooting, they shouted Allahu Akbar [God is greater]."

The group fighting the government in Somalia has taken responsibility for the attack that killed 68 people and wounded at least 175, saying it was retaliation for Kenyan-led African Union forces inflicting heavy losses on Al Shabaab in Somalia over the past two years, authorities said. About 10 to 15 of the militants from Al Shabaab were still in the upscale shopping mall at press time.

The assault by Al Shabaab, which has ties with Al Qaeda, appeared to be the worst terrorist attack in Kenya since 1998, when Al Qaeda killed more than 200 people in a truck bombing at the U.S. Embassy in Nairobi. Al Qaeda hit the U.S. Embassy in Dar es Salaam, Tanzani at the same time.
As Al Shabaab rebels have been has been driven from Somalia, many have gathered in border areas and launched attacks on churches, moderate mosques and government sites.

Some 1,000 people reportedly escaped from the mall, which is popular with foreigners, and Kenyan authorities were working to rescue others. Kenyan defense and internal security forces began an operation Sunday night, and by midnight local time the miltary announced "most" of the hostages had been rescued. Stating that four Kenyan military personnel had been wounded, Fox News reported that the 50 to 150 hostages trapped inside the building were hiding and not actually being held by the Al Shabaab gunmen.
###

Morning Star News is a 501(c)(3) non-profit corporation that relies solely on contributions to offer original news reports of persecuted Christians. Our mission is to inform those in the free world and in countries violating religious freedom about Christians worldwide who are persecuted for their faith. For free subscription or to make tax-deductible donations, contact This email address is being protected from spambots. You need JavaScript enabled to view it., or send check to Morning Star News, 24310 Moulton Parkway, Suite O # 157, Laguna Hills, CA 92637, USA.