It's got all the humongous vegetables, fascinating stinky animals, live music, carnies, con games with cheap prizes and deep fried deliciousness you could ever want. What you want get is a smelly crowd that ambles slowly and won't let you pass for nuthin'. The fair is not what this is about, but I will say this last thing: The age guesser pegged me at a whipper-snapping THIRTY-EIGHT! Well worth the $3 it cost to play. Plus we got a huge inflatable hammer that Bill mostly uses to bonk me in the butt.

I'm not married to a particular denomination; I just love me some gospel. And I love a church with fantastic, sophisticatedly arranged and presented rockin' music, so I was looking for such a place when I moved to Asheville in 2000. I settled in at Grace and Peace, though, because I loved this fellow's sermons and style. His MO is to go through books of the Bible chapter by chapter with the congregation, which I love. Nothing gets left out, and you get to hear about all the parts the pastor might shy away from otherwise. (Is this the longest intro EVER?) Anyway, Jonathan normally reads out the chapter at hand then just sort of talks through it, his quiet discourse always winding around to ... Jesus.

This past weekend, Jonathan said that his wife had made the following comment regarding an earlier sermon: "My mind kind of started to wander before you got to the Jesus part." So this time, he decided to BEGIN his sermon on Proverbs 3 with what he called, "the Jesus part." Now, I never gave much thought to the structure of his sermons until he brought this up. But now that he mentions it... that's exactly the way I write a blog! I never thought about it before (except the other day when I gave you the actual outline), but that's mostly how they go, right? Story, music, movie or book, self-deprecating humor.... JESUS! See? Because everything begins and ends with Jesus.
One time I was making an eight-hour drive to visit my brother and his family in Chattanooga and to pass the time, I thought, "I'm going to make every song on this album, (Pete Townshend's White City: A Novel) about Jesus." It was surprisingly easy. As Pete Townshend frequently trades in the imagery of sin and redemption, I was able to pull out at least one line or reference that spoke to me of God's own Son... I was momentarily stumped by the jealous tirade that is Second Hand Love, until I remember that God describes Himself as "a jealous God." Piece of cake. Delicious cake.

So, you see, everything really IS about Jesus. Even if it's completely ungodly, it serves as a contrast or a gaping maw of need. In the Revelation of St. John, Jesus says: "I am the Alpha and the Omega, the First and the Last, the Beginning and the End." I'm pretty sure He's everything in between as well. Paul says, "For from him and through him and to him are all things." And, "In Him we live and move and have our being." Yep. That about sums it up.

So in my mind, every story, every song, every aspect of life is tied up in the One who made us, and the world around us... whether we realize it or not. Remember when Horton heard the Who? Those tiny people were on the speck, whether or not the kangaroo and other naysayers acknowledged it our not. If only God would make an audible "YOP!" so we could know He's around. Oh wait... He sent His own Son. That's a fairly noticeable "YOP!" I'm being preachy, aren't I? I'd rather be cool like Jonathan... all mellow and understated... But I guess I'm just a little more out-of-control than that...

Anyway, I'm sure that to some people this aspect of my world view is pretty irritating. I can only imagine some are thinking, "Here it comes... wait for it... AND there it is! She mentioned Jesus." My actual conversations don't go like this, in case you were wondering... maybe if we got close and spent a couple hundred hours engaged in deep fat-chewing. Or if you asked. 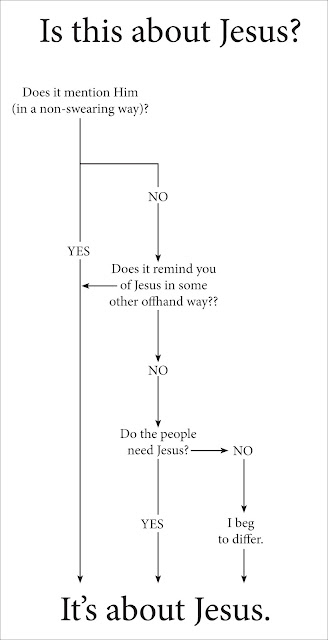