Bill Mallonee / Lands and Peoples, a review by Julie Moore 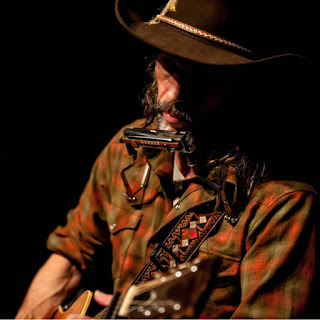 I’m supposed to write about this album, Lands and Peoples by Bill Mallonee, but I’ve got a lot of stuff swirling around in my head right now and I made the mistake of reading a couple of other reviews… which makes it kind of daunting… because I start to think, “That writer just said what I was going to say… and better than I can say it!”

Like the review that ran in No Depression where the guy pretty much rants that Bill Mallonee periodically offers his beloved axes and amps for sale just to stay afloat, when he should be basking in the glow of the world’s enjoyment and admiration. His tunes should be sung from the Redwood Forest to the Gulf stream waters because he can write the hell out of a song and has his guitar-pickin’ fingers on the pulse of REAL American music made for REAL American people in REAL America! (So it’s not an accident that I make reference to a Woody Guthrie lyric.)

Anyway, that reviewer laid down a true word. Of course he tells you right off the bat that he's biased, and so am I. I don’t mind telling you that that one of Bill Mallonee’s thousands of songs – Double Cure – is one of my most favorite songs in the songosphere. This is the link to the only version I can find on the world wide web, so it’ll have to do, but i’m telling you, this song is pure gold. The recorded version just … glistens. It’s got this great soaring guitar riff intro that echoes one of the sweeping lines from that hymn, All Hail the Power of Jesus’ Name.

But this isn’t about that song, as awesome as it is. Of course it’s about his latest release, as I mentioned,Lands and Peoples. It’s kind of like a songbook of stories about… yeah, lands and peoples. You know, America. It’s evocative… Mournful. Joyful. Wrenching. Shining. Hopeless. Hopeful. Self-effacing. Full of grace. Mallonee’s plaintive voice is all of those things too.
Because of the record’s quiet beauty, it works well in the background, and its got lyrical depth that makes it one of those oeuvres you can just lie on your bed and let it wash over you, sink into you… Like I used to do with R.E.M.’s records when they came out. It’s also not a coincidence that I bring up R.E.M., because 1. this record has a bit of that Byrds/R.E.M.-esque chiming guitar sound, and 2. Mallonee also played in an Athens, GA, band – Vigilantes of Love.

I wish I could say I knew more about that band, but I just don’t… although I became aware of that song Double Cure because it was on a compilation of V.O.L. songs that I bought through a Christian record club. (Remember record clubs? :-P) ’Cos Mallonee does love him some Jesus. Which is another thing I love about his stuff… that he loves Jesus. And it comes through, and not in a rusty hammer to the head way… but in a beautiful, sideways way that you can feel in your bones… that makes you feel like, “I’ll have what he’s having.” Even though his songs and his voice can be kinda sad…

Because sadness can be sort of a doorway to actual Narnia, in a way – just like we learned from watching Inside Out. It’s the rare artist who can find and express the beauty in the sadness of ordinary life… grace amid the fallenness of this world. I guess it comes from being deeply familiar with these words of Jesus: “Blessed are those who mourn, for they will be comforted.”

Not that it’s all beautiful sadness. Some of it’s just beautiful… like the song that says: “Ever since my eyes beheld your beauty and your grace, I’ll swing with everything that I’ve got.” And that there’s a baseball reference, if you're looking for Americana. There’s more where that came from, but like his Christianity, his American-ness isn’t forced nor are his songs in any way like those God-and-country songs that came out after 9/11. It's all just part of him. It reminds me of the time a pastor told me that my ministry was to be myself. Bill’s just being himself. And who “himself” is, among other things, is a beautiful soul, a dang good musician, and an evocative songwriter who deserves a lot more attention than he gets.

You can (and should!) behold/purchase this stunning work of beauty and grace here: https://billmalloneemusic.bandcamp.com/album/lands-peoples-bill-mallonee-cd-vinyl-download-formatsDISCLAIMER: I am not a professional rock critic, although I always wanted to be (thank you, internet!) You may find that my reviews are informed, less by objective analysis than by feelings and personal interpretation. That said, don’t people often choose music based on such things?