An Intro to Christ's Love: a review of the movie "Most" 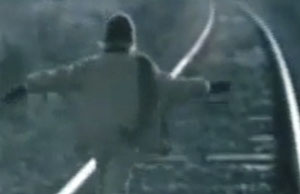 This story is about the close relationship between a father and his young son on the fateful day when they both try to head off an impending rail disaster. Hundreds of passengers on a train are unaware of the danger as they head towards an open drawbridge.

A simple but profound story, “Most” is rich with real life meaning and yet subtle in it’s Christian allegory so that even non-Christians are captured by it’s simple and beautiful message of hope. This 33-minute movie earned an Academy award nomination in 2003 for best short film in addition to wining top prizes at three other film festival competitions. This would be a good film for an “Introduction to Christianity” class.

Most is Czech for "Bridge." A pair of young Los Angeles filmmakers, Bobby Garabedian and William Zabka who are both devout Christians, created the film in Czech with English subtitles. The music score is by John Debney (The Passion of The Christ).