Separating Ourselves from God: the movie Memento 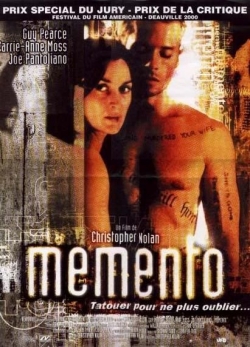 Memento is about Leonard, a man who claims to be suffering from memory loss—he can only keep a memory for a few minutes, and then it is gone. He is on the hunt for his wife’s murderer, and to maintain memories he keeps records of events via Polaroid snapshots and tattoos of information all over his body. But as has been noted in a few newspaper and magazine reviews, Leonard is not really honest with himself, and he is not honest with us, although we are not completely aware of this dishonesty until the closing scene.

The end of the movie raises questions as to whether he really does suffer from memory loss at all, and what role he played in his wife’s death. He is the manipulator of others, it appears.

Memento is a good movie to discuss in relation to holistic spirituality because it is about who we are with others and who we are with ourselves. With holistic spirituality, we choose to integrate ourselves fully into the life of Christ, and to be directed by the Holy Spirit in every aspect of our life. We choose to enable Christ’s life to be lived in our relationships, in our jobs, in our families, in our thoughts and our actions. It is complete, a wholly giving of ourselves to the Father to use us as He wants, and to be a living sacrifice. Memento shows Leonard choosing a life given over completely to perpetrating a myth about himself, and using any and all means necessary to coerce others into accepting his interpretation. Leonard attempts to recreate the realities of his life and provide his reinterpretations for everyone he encounters. He uses these recreations to advance his aims, which include covering up his role in his wife’s murder and drawing others into advancing his plot.
The way the movie is presented also serves as an able metaphor for how we can become disjointed and separated from the truth of God with little difficulty. Memento’s story doesn’t progress in a straight line, but jumps from the end to the beginning, occasionally moving sideways. Its story doesn’t unfold but folds us in on itself, pulling us into the deception of Leonard as surely as he pulls in the other characters in the movie. Leonard is not only similar to many people we meet, he is a symbol for the world at large; a duplicitous, evil place that seeks to distort the truth and uses every device to subvert the reality as perceived by each of us into understandings that prevent truth from being comprehended as anything but a lie. Without God directing us in each and every part of our daily life, without his Spirit breathing the truth through our words and heart, we will inevitably fall victim to the Leonards of the world, if we don’t become a Leonard ourselves.