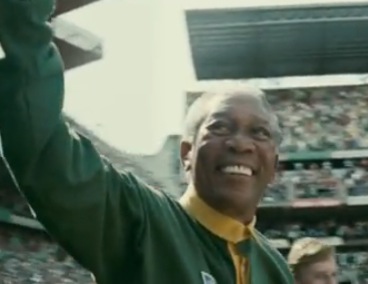 From the poem Invictus, Latin for unconquered, by Victorian poet William Ernest Henley and a favorite of Nelson Mandela’s, this movie characterizes the process of achieving reconciliation and forgiveness.

Invictus is a character study of a lonely and fatigued man who spent 27 years in prison for his political activism then became the first black president of South Africa in 1994. Mandella now in his 70’s is burdened with the leadership of a divided country.

Invictus is the story of the 1995 Rugby World Cup that Mandela saw as the tool to unite whites and blacks--provided the under-achieving South African rugby team could defy the odds to win. “Invictus” is rated PG-13. It has some swearing, the threat of violence and ruthless sports action. But this is an uplifting movie that shows, under the right leadership, good can conquer evil, and that forgiveness and reconciliation can be accomplished.

Invictus (2009), directed by Clint Eastwood and starring Morgan Freeman as Nelson Mandela, is a movie about the abolishment of apartheid in a country divided by mistrust, anger, and the cloud of civil war.

Invictus
Out of the night that covers me,
Black as the Pit from pole to pole,
I thank whatever gods may be
For my unconquerable soul.

In the fell clutch of circumstance
I have not winced nor cried aloud.
Under the bludgeonings of chance
My head is bloody, but unbowed.

Beyond this place of wrath and tears
Looms but the Horror of the shade,
And yet the menace of the years
Finds, and shall find, me unafraid.

It matters not how strait the gate,
How charged with punishments the scroll.
I am the master of my fate:
I am the captain of my soul.