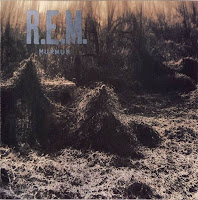 How do you feel about R.E.M? I love'em. My husband hates'em. They're not for everyone. But they are for me.

I remember getting the album Murmur for $4.49 at the Record Bar on Franklin Street back in '83 at the suggestion of my friend Allison, who actually knew them. I can hear her now saying, "Buy this - it's my friend Mike's record." So I spent what was not a small portion of my monthly college allowance for one of the best albums I bought that year - or maybe that decade.

I had to find this out, though, by being patient and persistent. Because an R.E.M. record has to sort of "sink in." Here's the drill: Get the album. Put it on the turntable (sic). Lie on the bed and play it through a couple of times - through headphones, or just really loud. Get up and do other stuff, but keep playing the album in the background. Somewhere between listen number ten and listen number twenty, you will undoubtedly find yourself saying either to yourself or out loud to a friend, "Damn, this is a masterpiece!"


What I wonder is, IF my husband put in the time and effort required, would he be able to appreciate the genius of R.E.M.? I mean, their music isn't aggressive or discordant... unless you really can't stand the jangly Byrds-esque guitars. Their lyrics may be a little vague, though - especially at first. I mean, listen to this early tune.
Eventually, the boys from Athens swam right into the mainstream with a few songs like Shiny Happy People andStand. These little nuggets were glittery pop jewels that charted fairly well, but where I think they are the most accessible is with the wistful, mournful Everybody Hurts. Because really - everybody does. The lyrics say so quite clearly.
In the album's liner notes, guitarist Peter Buck wrote: "The reason the lyrics are so atypically straightforward is because it was aimed at teenagers", and "I've never watchedBuffy the Vampire Slayer, but the idea that high school is a portal to hell seems pretty realistic to me." Later, he told the BBC: "If you're consciously writing for someone who hasn't been to college, or is pretty young, it might be nice to be very direct. In that regard, it's tended to work for people of a lot of ages."
Because... that's right, EVERYBODY hurts. Not just teenagers. But you already knew that... because you hurt too. You might be hurting right now.

Some people dull it with drink or drugs... Some people use good works - either to channel it constructively or maybe to buy their way out of it. While this may be admirable and keep you busy, I am pretty sure that pain will still be there at the end of the day. Another constructive way to funnel that pain is through art. As Lester Bangs says in Almost Famous, "great art is about conflict and pain and guilt and longing and love disguised as sex, and sex disguised as love..."

In that vein, a friend of mine plans to plow through the pain of illness and divorce by relaunching his stand-up comedy career. Honestly, the kind of comedy born from pain really moves me... like Louis CK, or Sam Kinison. Yeh, I don't think Sam was mad so much as hurting. While I think Jerry Seinfeld is amusing, he seems more puzzled and mocky than anything else... although, maybe he keeps it light, focusing on life's little quirks, in order to steer clear of any pain that might be lurking in his soul. And don't tell me he doesn't have any, because, that's right... EVERYBODY hurts!

According to the song, when feeling pain, one should "take comfort in your friends." A worthy strategy, to be sure... Friends, family, faith community... These can all be extremely helpful. Unfortunately, on one or two occasions I have been so inconsolable that I have worn friends and family completely out. They sympathized, oh yes, but they were simply exhausted from all my tears and yes, whining. I guess this is where trained professionals come in.

What I find funny is that I don't carry my pain to the obvious place - to God. Jesus was called the man of sorrows, acquainted with grief... and the Holy Spirit was called the Comforter... so why do I go everywhere else before I just lay it down at God's feet? The famous hymn What a Friend We Have in Jesus says, "O what peace we often forfeit, O what needless pain we bear, / All because we do not carry everything to God in prayer. (Dig this sweet version by Alan Jackson.) So I guess I'm not alone...

The dudes who wrote the psalms knew to do this. Psalm after psalm calls for God's help in times of trouble. Of course, these guys were also turning their pain into art, right?

Another brilliant artist who knows how to turn pain into art and run to God at the same time is Julie Miller. A survivor of abuse and a constant Christian pilgrim, she cuts right to the heart of it with songs like Broken Things and By Way of Sorrow. She makes it almost enjoyable to cry out one's pain.

I will say, though, that running to God does not always yield immediate relief... but you CAN have the satisfaction of knowing that you have come to the only one who can actually do something about your deep soul pain. Peter, who knew Jesus personally I might add, told people who were suffering from harsh persecution to: "Humble yourselves, therefore, under God's mighty hand, that he may lift you up in due time. Cast all your anxiety on him because he cares for you." Sounds like a plan.